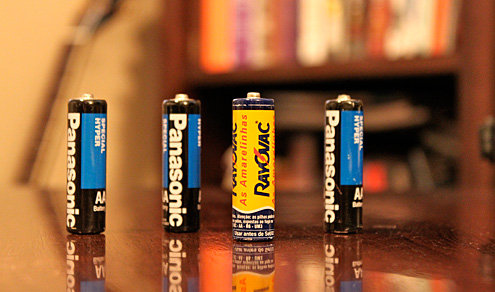 As found in my lost SLR flash unit.

Ever wonder which controller has the best battery life? If so, you’re in the right place. Over the last month, we juxtaposed Xbox 360, Wii, and PS3 controllers at GamePro Towers to find out which ones go the distance. Though our research is far from scientific, we isolated all obvious variables, rigorously documented our findings, and worked in an uncontaminated testing environment for optimal significance.

For our tests, we cleaved to the following criteria: We only used out-of-the box hardware — that means no charger packs for 360 and Wii, which must be purchased separately. We played a wide variety of games on each console, including lengthy single-player adventures and shallow downloadable games, both online and off. We played for varying time intervals, from fifteen minutes to upwards of eight hours (Hello weekends!). We used Duracell CopperTops for 360 and Wii testing. And we deemed all battery(s) dead after attempting to reconnect the controller for a third consecutive time. Behold, the results: