In 2015, the U.S. Department of Justice indicted dozens of global soccer officials on charges of rampant bribery, money laundering, and widespread corruption. As the “FIFA fallout” continues, here’s what organizations can do to keep themselves honest, in good standing with the law, and free from corporate fraud.

The month before the 2014 World Cup was set to kick-off in Brazil, a Los Angeles journalist by the name of Ken Bensinger received a juicy tip from a colleague. According to the tipster, a top U.S. soccer official by the name of Chuck Blazer had defrauded the sport of more than $20 million dollars. Not only did the official deal in the wholesale bribery, but he apportioned 10% of almost every single dollar that came in—even hot dog sales, even on charity games.

Bensinger did some digging, confirmed the rumors, and published his wild, investigative story for Buzzfeed News. The story went viral, and quickly uncovered a rabbit hole of obscene corruption that reached nearly every region of the global sport, from the bottom to the top. Although international FIFA officials were always suspected of rampant fraud, Bensinger’s story was the first to reveal that the culture of crime had undoubtedly reached U.S. shores.

A year later, with the help of a cooperating Blazer, the U.S. Department of Justice indicted the first of dozens of FIFA officials on organized crime charges of racketeering, bribery, money laundering, and fraud. That seismic event lead to Bensinger’s groundbreaking and riveting book, Red Card.

I recently spoke to Bensiger about the fallout and what companies can learn from the largest sporting scandal in world history. And although few, if any, legitimate businesses operate as organized crime syndicates like FIFA often did, Bensinger was quick to diffuse the proximity.

“It was organized crime, but the corruption case also involved several legitimate businesses,” Bensinger says. “Sports marketers, big broadcasters, and sponsors such as Coca-Cola, Sony, and McDonald’s, the latter two which even canceled their contracts with FIFA as a result.”  END_OF_DOCUMENT_TOKEN_TO_BE_REPLACED 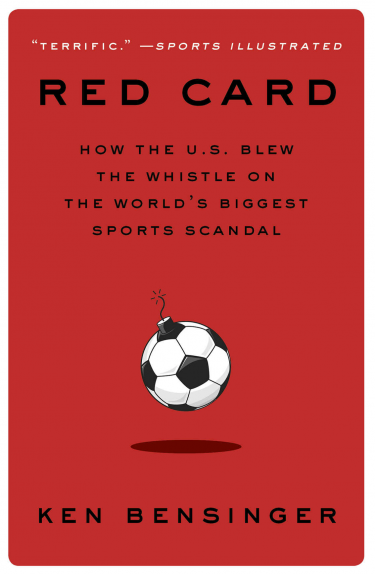 I feasted upon and finished reading Red Card: How the U.S. Blew the Whistle on the World’s Biggest Sports Scandal in just two days.

Although I’m a devoted World Cup fan, you don’t have to be a soccer fan to enjoy it. The hard-to-believe true story, mob-like drama, and lavish chicanery are more than enough to keep the average reader interested.

Written by Ken Bensinger, a wonderful wordsmith and storyteller, the book is the most well-researched non-fiction I’ve encountered since Hillenbrand’s Seabiscuit or Unbroken.

For its ability to show how bribery hurts everyone except the few involved, I highly recommend it.