After 10 million votes, the results are in. Designer Mark Ecko will brand Barry Bonds’s record-breaking home run ball with an asterisk and the Hall of Fame will accept it — blemishes and all. Let it serve as a reminder that it takes more than a number to earn the respect of your peers.

“This ball wouldn’t be coming to Cooperstown if Marc hadn’t bought it from the fan who caught it and then let the fans have their say,” Hall of Fame president Dale Petroskey told The Associated Press. “We’re delighted to have the ball. It’s a historic piece of baseball history.”

What a *perfect* exhibit for a museum.

DISCLOSURE: After reading Game of Shadows and numerous reports, I’ve come to the conclusion that a) Barry Bonds is not a cool dude, and b) he knowingly took steroids in an effort to break records despite his being one of the greatest hitters to ever play the game. 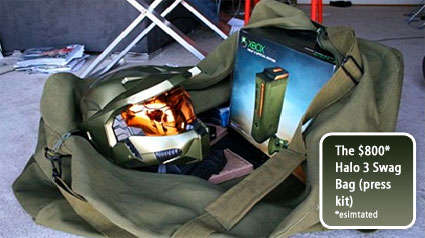 Microsoft released Halo 3 for Xbox 360 today. The game will sell millions, it’s already getting very good reviews, and Microsoft hopes (and needs) the game to be the biggest entertainment launch in history to reverse ongoing losses in its Xbox division.

“With nary a pirate, a spider or a wand in sight, day-one sales of [Halo 3] are expected to shatter entertainment sales records and top the biggest entertainment launches of all time,” Microsoft said in a statement. The current holder of that record is Sony’s Spider Man 3.

Over the weekend, Microsoft sent out what game journo Dean Takahashi called “propaganda: an $800 bribe (shown above) to convince the gaming press that Halo 3 is the biggest event of the year.” Takahashi says he’ll send the free loot back to Microsoft in an effort to tame the hype.

I could be wrong, but assuming Takahashi’s calculations are correct, the swag bag could be one of the most exorbitant press kits ever released. But will it serve its purpose in convincing the world by way of glowing coverage that Halo 3 is a mass media event that transcends rank and file video game enthusiasts like myself?

Halo 3 needs to be more than a great game to achieve its commercial objectives. It needs to boost and maintain solid Xbox 360 sales which have slowed in a post-Wii world. It needs to offset the $10 million plus in marketing costs that Microsoft has so far shelled out. It needs to appeal to a lot more people than it has in the past even though the third installment is largely the same game.

But it will need more than an auspicious swag bag to accomplish all that, and I don’t think any game, regardless of who makes it, is that good.