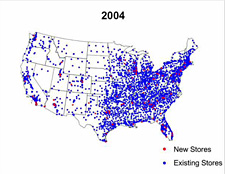 Even though Wal-Mart spreads like a germ, as evidenced in this video, times are changing (sorta).

The Wall Street Journal reports: “Wal-Mart’s influence over the retail universe is slipping. In fact, the industry’s titan is scrambling to keep up with swifter rivals that are redefining the business all around it. It can still disrupt prices, as it did last year by cutting some generic prescriptions to $4. But success is no longer guaranteed.”

Note: I shop and buy groceries at Wal-Mart.