In preparation for a bigger car, Lindsey and I sold our beloved Jeep this weekend. As a replacement, we’re planning to buy a 2007 Ford Freestyle, which seats 6-7, but handles like car instead of a splashy SUV or van. After seeing the above commercial, I’m officially calling our anticipated new ride the Swagger Wagon. Only better because it’ll look like a Volvo instead of a paddy wagon.

I arrived at church on Sunday only to find the second to last parking spot double occupied by a similar BMW X5 (not pictured). Heaven forbid mere mortal cars like my ’99 Jeep Cherokee meddle with such fine German engineering in a car park. I only wish I had the guts and lack of a moral compass to do this: END_OF_DOCUMENT_TOKEN_TO_BE_REPLACED 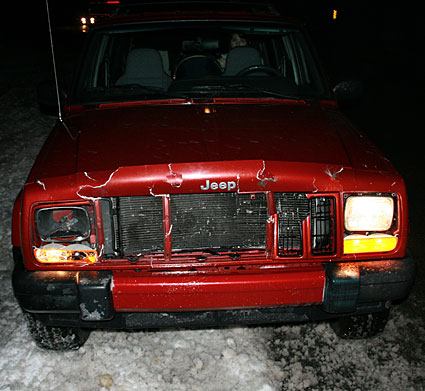 This is the front grill of my 1999 Jeep Cherokee after colliding with a large deer while heading south on East Canyon Road just outside of Orem. You should have seen the deer.

I’m happy to report that Lindsey, Sadie, Maddie, and I are all fine — though it could have been much worse had I not just plowed through the thing, especially given the snowy conditions. Jeep is currently under repair at the body shop.

Immediately after hitting the prancing beast at 55 miles per hour and pulling over to power down my smoking engine, Sadie kept repeating, “Scary.” It was.