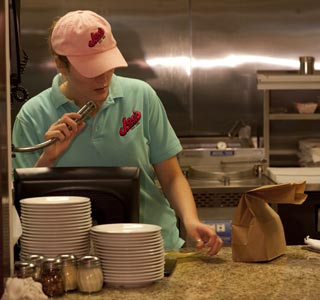 I stiffed my take-out waiter for the first time this weekend and got an ugly look for it.

Normally I tip receptionists a buck for boxing my meal and carrying it all the way from the kitchen to the reception desk. (Excruciating work, I know.) But this time I grew a pair and followed my wife’s example: Don’t tip a restaurant worker for putting carry-out in a bag for you.

Again, I’m fine tipping someone that actually “waits on you” in a dining room. Servers don’t get paid a minimum wage. They’re normally hard workers and/or are struggling to make ends meet. So I’m happy to throw a few Washingtons their way for good service.

But I’m done tipping for carry-out, since the person handing me my food doesn’t add any value to my patronage, nor do they serve. I don’t care if it’s the bartender, the host, or some other receptionist. And I’m not going to let awkward attempts to “serve me” a bag or ugly looks deter me. Unless, of course, you can convince me otherwise.

Do you tip for carry-out food? If so, why?