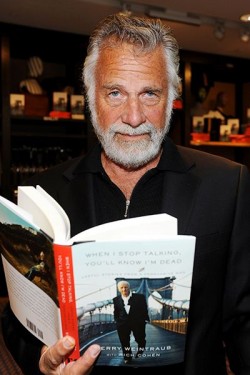 ESPN this week interviewed Jonathan Goldstein, the man behind The Most Interesting Man in the World. My favorite quote:

“It’s every guy’s fantasy to be like him — including mine,” he said. “I hope our viewers can get a chuckle, but also get good advice. Be interesting, don’t be boring.”

I’m a teetotaler. But I can’t stop laughing at The Most Interesting Man in the World, the fictional celebrity endorser for Dos Equis beer (similar to Chuck Norris Facts). As usual, the new ad spots are proof positive that beer advertisers are the funniest in the world.

But I digress. I’m not here to talk about beer ads. I’m here to name the most interesting facts about The Most Interesting Man in the World. They are as follows, according to reputable researchers, top scholars, and his contemporaries: END_OF_DOCUMENT_TOKEN_TO_BE_REPLACED