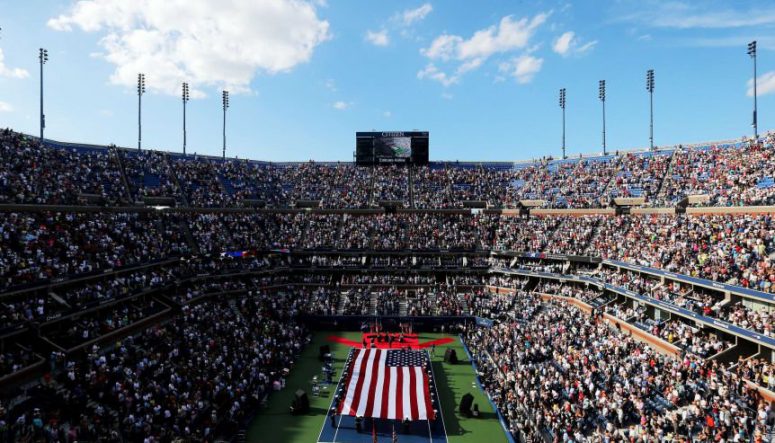 Although unusual elsewhere in the world, the United States is very patriotic and proud when it comes to commencing athletic events with its own national anthem. Why is that?

In this excellent 12 minute report by Cheddar, it’s fascinating to see how the tradition took root, and how it might change (or not) in the coming years.

My personal opinion: I like the sporting staple and don’t think it’s overplayed, since most people only participate in it when in person or during big televised events such as the Super Bowl or Olympics.

The rest of the time we mostly skip it, which keeps the anthem from becoming blasé (unless of course your one of the rare athletes that hears it before every game).

And it came to pass, that rock ‘n’ roll was born. All across the land, every rockin’ band was blowing up a storm.

The guitar man got famous. The businessman got rich. And in every bar there was a super star with a seven year itch.

There were fifteen million fingers, learning how to play. And you could hear the fingers picking, and this is what they had to say: Let there be light. Sound. Drums. Guitar.

I listen to this song often while working on my body. It never fails to get me going.

Michael Jackson was undoubtedly the most disturbed musician of all time. He’s also the greatest R&B performer ever—both as a singer and a dancer—and a top 10 all-time artist, right next to Mozart, The Beatles, and Led Zeppelin. If you’ve forgotten how talented he was in the recording studio or on stage, I encourage you to listen to Thriller, the best-selling album of all time.

With the King of Pop’s recent death, I can’t think of a better time to list his best hits. There are 20 other songs equally worthy of the honor, but in terms of what gets me moving the most, these are the top 10 Michael Jackson songs of awesome: END_OF_DOCUMENT_TOKEN_TO_BE_REPLACED