… than watching this. Usually (I make exceptions for high-profile sporting events and the occasional Netflix stream.)

Point is, DVR lowers your standards. You wouldn’t watch half that crap (and by “crap,” I mean poorly produced, written, and acted shows when compared to movies) if it were live. So why subject yourself to lesser entertainment? I’m sure some people use DVR as it was designed: to make it easier to watch the shows you used to watch live. But the majority of DVR users actually abuse the technology, and end up watching more television (i.e. settling) than they normally would.

In that sense, DVR is not better living through technology. It’s clouding our judgment. It’s reducing our ability to think critically.

[youtube]https://www.youtube.com/watch?v=TbqJm2birME[/youtube]
Lindsey and I watched The King of Kong: Fistful of Quarters on Wednesday, a hilariously funny “documentary” that follows Steve Wiebe as he attempts to overtake the world’s highest score in a game of Donkey Kong from reigning champion Billy Mitchell.

END_OF_DOCUMENT_TOKEN_TO_BE_REPLACED 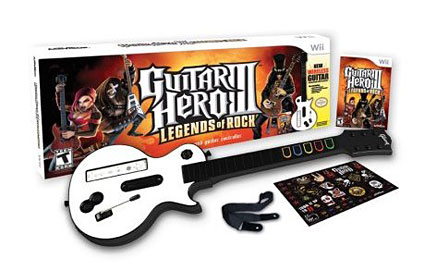 I haven’t played in a band for years — until tonight. It wasn’t the kind I used to enjoy as a confused teenager or hipster undergrad. But it sure felt the same.

We took turns playing imaginary guitar and bass in real-time on Fisher Price-like axes — he in Georgia, and I in Utah. Even though I work online for a living, I’m still amazed by the simple things the internet is capable of achieving. In this case helping two has-beens feel young again.

And we didn’t even have to deal with a mediocre PA system. 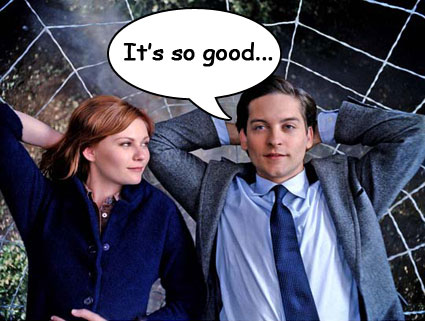 Spiderman 3 is the best comic book movie ever* followed closely by Batman Begins. Interestingly, however, this movie is getting slammed in reviews with most people saying it tries to do too much. I, on the other hand, loved this movie. And while it is a tad long, I thought Columbia Pictures did a great job pulling all the stories and subplots together in a clever Seinfeld fashion. And yes, the movie is hilarious.

Regardless of what you may have heard, here are five reasons why Spiderman 3 is the best movie in the series not to mention the best comic book film to date: END_OF_DOCUMENT_TOKEN_TO_BE_REPLACED

When I first saw the trailer for Rocky Balboa (read: Rocky VI), I thought, “Oh man, is Stallone out of his mind?” Maybe a little, but that’s the whole point of the film. People can’t believe Rocky would fight one last time, and people couldn’t believe Stallone would make yet another movie in the series at age sixty. That incredulity plays, however, right into the movie’s central conflict and stretch of a plot. Rocky Balboa is an inspiring, albeit, very fictional story. Keep that fiction part in mind when seeing this film, and you’ll leave having watched a very good movie.

The premise of the story is that the current heavyweight champion, Mason “The Line” Dixon, is too dominant for his own good. He can’t find a decent challenger to save his life. Enter an ESPN “computer fight” simulating a win over Dixon by the Italian Stallion. With that, Balboa eventually decides to come out of retirement to fight the champ in an exhibition match, well, because “fighter’s fight.” “When life beats down on you, you take it and keep moving forward.” That’s the essence of the movie’s story and it works very well. It’s got a lot of heart.

Sure, Stallone’s botox ridden face bothered me a bit at the start, but I found myself never growing tired of the engaging dialog and willing the movie to continue. The lines aren’t perfect, but they’re engaging, funny at times, and surprisingly impressive none-the-less. Watching this film made me realize that Rocky serves up a hefty piece of Americana: Classic music, a fighting spirit, and the idea that it ain’t over until it’s over. 4/5 stars from this here blogger, and that’s even excluding the nostalgic factor.

This documentary was a surprise to me. It is extremely well done and the cinematography is fantastic. It’s a heart-felt story of how Empire Penguins migrate and breed during the cold winter months in Antarctica. You will be amazed and impressed upon seeing what it takes to give birth to a baby chick and how family oriented Penguins can be. Very good story and it helps to have Morgan Freeman narrate.

I’m gonna come right out and say it… A-. That’s what I give the recent Warner Bros release based on excellent character development, captivating story, truthfulness to the overall comic genre, and shear entertainment. It must be noted, however, that of all the comics I liked as a kid, Batman was my favorite. He is the only super hero that doesn’t have any super powers. Well, unless you count the earnest desire to combat evil and a plethora of money to build nice toys.