That said, you can often get the following seven things for free on your next flight. You just have to ask. END_OF_DOCUMENT_TOKEN_TO_BE_REPLACED

Lindsey and I finally pulled the plug last week on our basic Comcast cable package, one that cost $14/month for 30 channels (plus the four HD network stations). The Discovery and Travel channel will be missed, as ESPN has been in my house for two years now, but the picture quality and available channels of over-the-air TV never ceases to amaze me.

Using $13 dollar rabbit ears purchased from Best Buy, we now get 17 digital channels (excluding Spanish and complete trash programming), eight of which are broadcast in splended high-definition (CBS, ABC, NBC, FOX, PBS, CW, KJZZ, and PBS 2). Fortunately for the sports addict in me, I at least get the later rounds of all major tournaments, as they are always broadcasted on the four network stations.

Now all we need is free wi-max, the soon-to-be announced free PS3 to DVR firmware, and I’ll be set. Anyone else in the room enjoying over-the-air HD? 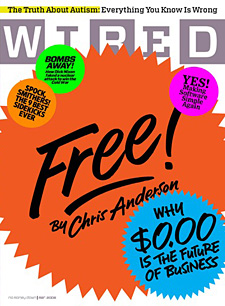 I just got done reading Chris Anderson’s 6,000 word preview for his upcoming book Free! Why $0.00 Is the Future of Business. In short, the article examines cross-subsidies (read: giving away razors to sell razor blades) as they pertain to the web products and their near-zero operating costs. You can have a free lunch so long as someone else picks up the tab, maintains Anderson.

While the article was informative, I don’t think the strategy of giving is “the future of business,” rather it’s an effective marketing tool for select web companies — not everyone, and especially not for offline ventures. Still, Anderson presents some compelling evidence that “free” will become more ubiquitous than I currently believe.

Ironically, and in an effort to deflect the “wait a minute, your product isn’t free” criticism, Wired is offering up to 10,000 copies of its March 2008 issue at not cost to you (a fraction of the 500,000+ issues the publisher sells every month, mind you). Not quite what I’d call “practice what you preach,” but then again, I don’t think Anderson’s article endorses the demise of direct sales altogether, even if his headline does.