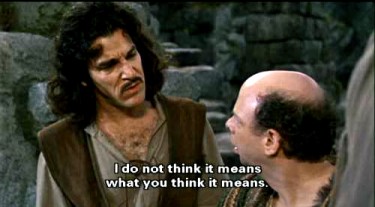 As a writer, I sometimes get reader mail.

As for typo-related mail, most of that is really nice. “Hey, Blake. Enjoyed your story on [insert popular story here]. Noticed a typo, however, and thought I’d share.”

Some of it gives me the benefit of the doubt. “Hi, Blake. Perhaps your spellcheck mistakenly changed ‘espoused’ to ‘expelled’?”

“No, kind reader,” I’ll reply. “My bad diction stuck again. Thanks for keeping me honest.”

Still, some of the mail I receive is unforgiving. As if my mistakes should disbar me from contributing to mainstream media. As if I should master English before using it to articulate a point, tell a story, answer a question, or inspire change.  END_OF_DOCUMENT_TOKEN_TO_BE_REPLACED

[youtube]http://www.youtube.com/watch?v=_tIyt8oSLVs[/youtube]
Randy Pausch, a computer science professor diagnosed with terminal cancer, clearly understands the value of life. His thoughts on carpe diem, achieving your childhood dreams, and materialism are precise, inspired, and honest (no gimmicks here).

At the time of his discourse (Sept. 2007), doctors said Pausch would have “three to six months” to live. As of today, he is still alive. His original full-length lecture at Carnegie Mellon can be found here.

See also: My attempts to be a shoe designer | You have a choice

As long-time Smooth Harold readers may already know, I’m big on people doing what they love (if sustainable, of course) no matter what the obstacles. As an unaccomplished entrepreneur trying to grow, such examples serve as inspiration and encouragement for me. Enter the story of one Wade Daniels.

Wade is married to my wife’s cousin. He has wanted to become a doctor since a young age. He studied pre-med and worked at a hospital during his undergraduate degree. He took the MCAT and applied to both top- and lower-level medical schools last year. His preferred school of choice, which is also where he got his bachelor’s, was the much acclaimed medical school of the University of Utah. To his disappointment, he was accepted to none. Not even the lesser known schools offered him a spot due to poor MCAT scores. When most people would have gone into something else, Wade–out of a love for medicine– decided to keep working at the hospital and study for the MCAT again for a full year.

Earlier this summer, and after re-taking the medical test to much better results, Wade got accepted to medical school. And wouldn’t you know it, it was his top pick and one of the most difficult to get into (especially as a native of Utah): The School of Medicine at the University of Utah.