Brilliant! A picture truly is worth 1000 words. Via Ads of the World. Bonus: Go check out these three crazy ads from years’ past. Blowing smoke in a girl’s face used to be a turn on…? It did in advertising. 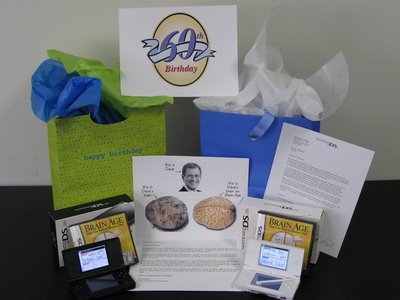 In case you didn’t know, Nintendo has been on a storm over the past year (I’m a big fan). Their stock has doubled over the past 12 months thanks to their nifty little DS handheld and motion-sensing Wii console.

So in commemoration of Letterman’s 60th birthday, Nintendo sent the late-night host a candid and personalized letter along with 2 handhelds and games that it’s pitching to an older generation, all with an insane amount of message consistency. The letter copy is far from the bloated stuff PR peeps normally send. Have a look for yourself.

Assuming Dave’s publicists personally delivers the loot, I’d be surprised if Letterman doesn’t name drop the product on his show. So let’s recap how to earn quality free media:

Despite being a celebrity, people still love free personalized goodies. Everyone has a flattering point. Make sure you product or service can do that, and it will be a lot easier to get free coverage.

This post comes courtesy of a good friend — Nicholas Roussos — as he so concisely describes and interesting event that transpired in public relations yesterday. First a little background. Sony’s newly launched PlayStation 3 is in a world of hurt. It costs a whopping $600 (Blu-ray included) and people aren’t buying it. The value proposition just isn’t there yet (if ever) on a mass scale. Note: PlayStation brings in 60% of Sony’s total profits.

So yesterday, the world’s largest gaming blog, Kotaku, leaked information that Sony would be releasing a new social networking tool heavily inspired by Nintendo’s and Microsoft’s already existing user-generated content efforts. Sony asks them not to run the story, but Kotaku rightfully does anyway.

About an hour later, Sony blackballs Kotaku from all company relations saying only information in the “public domain” will be made available to Kotaku in their coverage of Sony products. Kotaku publishes Sony’s archaic email ban and fittingly describes the biggest conflict of interest between PR and journalism in a respectful reply to Sony’s head of PR, Dave Karraker: “I think [your reaction] only highlights the differences that PR people and journalists have. My interest is not in making sure that Sony has positive news or that the timing of their news is correct, my job only is to inform the readers of news as quickly and accurately as I can.”

Immediately after Kotaku’s follow up post to their rumor, the internet implodes. Every single gaming blog is quick to criticize Sony’s reaction. The story reaches Digg’s homepage, and Sony’s already negative relationship with consumers spirals even further out of control, all in a matter of hours. Sony quickly caves, and reinvites Kotaku to all of their events, etc. Everything like it was before only Sony leaving having learned a valuable lesson. That is the online conversation changes everything, as Nic states “Cluetrain-style.” The above example shows Sony PR trying to do what traditional PR does; control the message and its timing. Kotaku makes that effort to control public and fosters more leverage against the mighty Sony corporation than it ever could alone. The online conversation is so powerful that even a company as big as Sony has to give in.

I don’t care what calculated advice your PR company gives you, this is how you start correcting a mistake if you run a consumer business, or any business for that matter. It’s called a sincere apology and it’s been helping men stay out of the dog house since the dawn of time. Watch as JetBlue CEO David Neeleman publicly apologizes on YouTube to his customers. He takes full responsibility after leaving numerous passengers stranded on a frozen tarmac for 10.5 hours at JFK. Admirable.