We all know that a million, billion, and trillion are very big numbers. But we often don’t appreciate the staggering increases between them. For example, a million seconds equals eleven days. That’s a lot, but two weeks isn’t that far away. A billion seconds, however, is over 31 years—either a third or even half of a lifetime depending on how healthy you are. Now that’s a lot.

But a trillion is unfathomable, if not completely unrelatable to our lifespan. In fact, a trillion seconds is over 31,000 years!!!

The more you know.

See also: A Short History of Nearly Everything

Time flies if you’re one of the following: old, busy, or having fun. Here are two reasons why:  END_OF_DOCUMENT_TOKEN_TO_BE_REPLACED

I’ve done some light reading on time use this summer — invigorating stuff, I know — and came across some insightful observations from John Robinson. He’s spent the last four decades reviewing thousands of “time journals” from people around the world.  END_OF_DOCUMENT_TOKEN_TO_BE_REPLACED 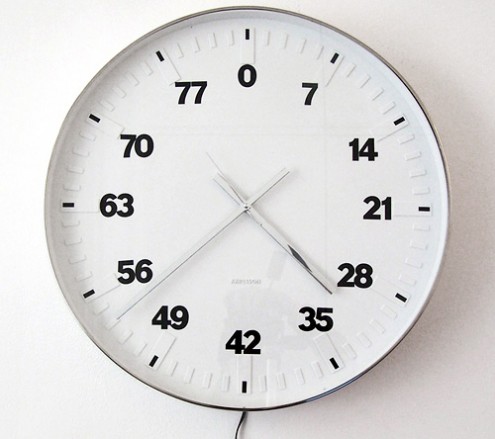 I few years ago, I discovered hand clocks. I had seen them before, but digital clocks far out number them because the latter are easier to read and can do a lot more. In any case, I buy and prefer hand clocks now, because they tell time without making it the focal point of my day. Since you have to look directly at them to read, hand clocks are there when you need them, without starring you down.

Digital clocks, on the other hand, are always looking at you. Whether illuminated in bright green, blue, or red light, it’s impossible to walk past them without getting an update—down to the latest minute even. As a result, digital clock perpetrators have a tendency to count time, as opposed to using it to stay on schedule. At least that was the case for me.

Since making the switch to hand clocks, however, I’m just as on time as I was before. Plus, it’s easier to live in the moment.

As newspapers — and by extension 80% of all original reporting — face extinction, along with print, the magazine says websites should charge $.10/day or $2/month to access the news. Author Walter Isaacson says this will offset the loss of subscription and classified revenue so creative journalists can still “get paid” in addition to advertising, which isn’t performing well online.

As a freelance journalist, nothing would please me more than getting better pay for the work I do. But I think Isaacson is off the mark — people will never pay for commodity information online (remember the failed “paid” content idea?). If network TV news can survive (while some even thrive) on advertising alone, why can’t websites? Isn’t the idea to stay lean and mean and choose your reporting battles, which can be expensive (say… stationing a full-time journalist in Iraq like the LA Times does on its constituents’ dime)?

Anyone got any ideas? Otherwise, our ability to watch guard government, corporations, and the public through journalism could be compromised. 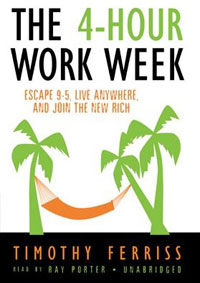 Wow. Just wow. The 4-Hour Work Week is the most influential book I’ve read in years. Author Timothy Ferris, though a self-proclaimed extremist, dishes on slowing down your life, getting out of the rat race, outsourcing menial tasks, ditching your RSS feeds, batch processing email instead of checking it every 15 minutes (if not more), reducing unnecessary information consumption in favor of productivity and real learning, how effectiveness trumps efficiency, and how the idea of “retirement” is grossly flawed. In short as the book description tells, “Escape the 9-5, Live Anywhere, and Join the New Rich.”

Ferriss defines the new rich as those who favor mobility, experience, and service in favor of materialism. He counsels in great detail how to setup an automated online company for newbies (easier said than done, though possible) and how to focus your daily work efforts without letting fluff work get in the way. Best of all, Ferriss delivers it all in a very grounded, balanced, and hilarious way despite what his sensational title and clever tagline suggest. Overall, the book is unthinkably smart and of value to any person over the age of 18. I resolve from here on out to work smarter while striving to do what I love further still. That and more world travel, of course. :)

On that note, I’m planning my attempt to ditch the Internet for an entire year. I don’t have all the kinks figured out, and twice weekly email use will have to stay, but I will triumph within the next five years. Just you watch.