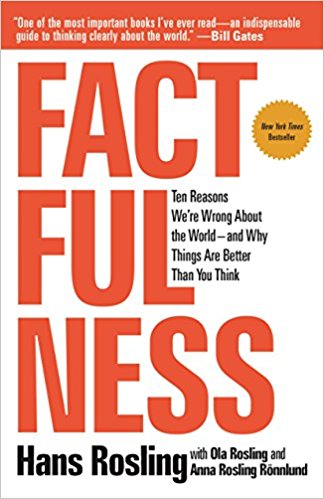 The news is wrong.

In terms of health, nutrition, income, vaccinations, education, sanitation, transportation, homes, lifestyles, modern conveniences, violence (i.e. death from wars or terrorism), abuse, and many other parameters, the world is a much better, happier, healthier, and peaceful place than ever before, according to consensus data.

As proof of this, Factfulness by Hans Rosling is the latest in a growing number of fact-based news that show we really do live in the best time ever, and things are getting even better.

Why does the news and human perception bemoan our impressive existence rather then celebrate it? The short answer is fear sells and human are irrational beings. But Rosling adds 10 specific myths that keep us from seeing the truth, along with ways to fix them.

They are as follows:

All told, Rosling’s book is wonderful—four stars out of five. To make our world even better, we must abandon our developed versus developing worldview, he argues. Businesses must turn their attention to growth markets such as Africa or Asia (or suffer the profits). And our journalists must develop a less dramatic and more fact-based method of reporting world events. To do this, we must all cover and interpret news events with a much more balanced perspective.