Until I get around to writing a condensed, more interesting story, here’s a chronology of mostly personal events:

1979. Born in Moscow, Idaho to goodly parents named Brent and Cathy Snow as the fourth child of six and second son in the family. Moved to Oklahoma one month later.

1986. Exposed to my first home computer and modern video game console after my mother bought a colored IBM PCjr and some neighborhood friends scored a Nintendo Entertainment System. The love affair with technology, personal computers, and video games had begun.

1987. Baptized on July 4 as a member of the Church of Jesus Christ of Latter-day Saints, a Christian belief-system that I doubted briefly in my adolescence but ultimately grew to appreciate, respect, and hold fast to. 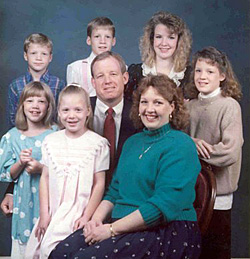 1989. Finished ninth place in the 400 meter dash at the Oklahoma Hershey’s Track Meet after qualifying at the city and regional levels. I was beaten by much faster Native American runners and placed second to last at the event. But I’m still proud of the statewide accomplishment and the athleticism with which I have been blessed (thanks, Dad), one that would facilitate a competitive flare in the years to come for basketball, football, soccer, and baseball, the latter of which I still play to this day.

1990. Began honing my skills as an imitation designer, that is someone who can recognize and replicate good design by imitating legitimate designers. I started by drawing shoes (even submitting my designs to Nike) and latter moved to graphic design, web development, and online publishing.

1991. Discovered Rock ‘n Roll for myself after raiding my sister’s CD collection for Nirvana’s Nevermind, Led Zepplin’s Houses of the Holy, and a cassette tape of Metalica’s Black Album that my brother Brooks had acquired. Though I was raised on Beach Boys, my fascination with all genres of music including classical, hip-hop, and electronic had begun.

1992. Moved to Georgia after my father took an administrative job at West Georgia University. Was initially intimidated by Southern Accents and Black Vernacular English before quickly growing fond of the diversity and culture. 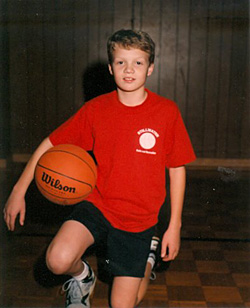 1994. Was invited to job shadow the Atlanta Hawks front office after writing them a letter. It was a remarkable experience for a 14 year-old boy and his two friends, but one I alienated in the end by sabotaging pre-canned response letters we were tasked to envelop and mail with lewd childish drawings. Of course we were discovered as the culprits, and it resulted in one of the most humbling and embarrassing mistakes I have ever made in my life. But it was a memorable lesson in humility, shame, apology, forgiveness, and kindness learned at a young age, and one that would encourage me to quickly come clean with my mistakes in the years to follow.

1995. Learned to play guitar while staying home sick one day after months of dabbling. By the time my brother and his friends returned from school, I could play Green Day’s entire Dookie album, which was little more than bar chords, which I had just learned. Also started composing music and formed my first band called Formaldehyde, a trio which lasted nearly two years and tricked me into once thinking I wanted to become a rock star.

1999. Flew to southern Brazil where I would live for the next two years as a volunteer, proselytizing missionary for the LDS Church. I have yet to return and miss my hospitable friends dearly—what a lovable country! 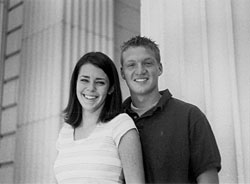 2002. Moved to Provo, Utah in an effort to spread my wings and upgrade schools. Became fond of the insanely proximate mountains, dry summers, and am amazed that few parts of Utah provide inhabitable land. Still not particularly fond of the frigid winters and copious amounts of snow. Bought my first cell phone.

2003. Married Lindsey Anne Smith, an attractive and selfless brunette from Seattle, Washington, after putting the moves on her a year prior. Also founded a small web design firm called Griffio amid rising demand, a company that would become my first post-education employer a year later. Started working from home.

2004. Graduated from Brigham Young University with a bachelor’s degree in business (Go Cougars!). Rediscovered what it feels like to have free nights and weekends without having to worry about looming deadlines.

2006. Moved 10 miles up the road to a condo in Orem, Utah, one the most family-friendly towns in America. Became a full-time writer, video game critic, blogger, and recovering web consultant working for both online and print publishers located in San Francisco, New York, and Los Angeles.

2007. The birth of my second child, an animated and watchful little girl. Surprisingly, two kids is a lot more manageable than I thought, if you put the first child to work, of course.

2008. Expanded my writing career to NBC, WSJ, CNN, and Fox. Also started commercial writing work and consulting. Discovered golf. Would play all day if I could. Also rediscovered camping and the great outdoors. 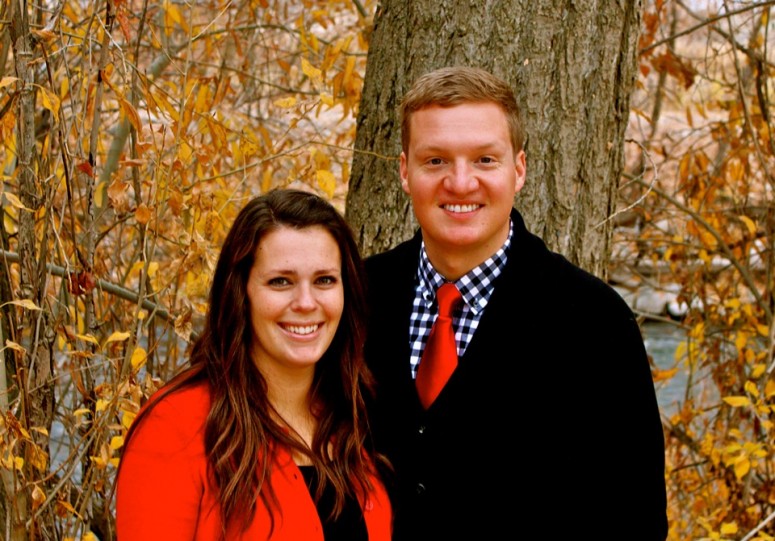 2009. Went surfing for the first time. Survived the Great Recession. Took the family to Yellowstone. Batted .310 w/ 11 RBIs in 8 games. Canceled my cellular data plan and rediscovered nights, weekends, and an uninterrupted personal life in the process. Started a book.

2010. Moved to Provo, my favorite city in the world. Welcomed our third child into the world (another girl!). Bought a new car. Finished my first marathon. Visited New England for the first time. Saw the Yankees beat the Red Sox at Fenway in extra innings. Hiked Capitol Reef and Bryce Canyon. Quit social media.

2012. Welcomed my first son into the world. Sold a website. 4-wheeled Canyonlands. Ran my second marathon with my wife. Furnished my backyard with a zipline. Viewed a solar eclipse. Camped Little Grand Canyon. Fell in love with veggies and from-scratch cooking. Reunited with all my siblings for the first time in 10 years. Saw the Eiffel Tower. Ruined a transmission and bought another new car. Made a living like this. Found a life-long motivator for good health. Slipped one past the goalie.

2014. Got stranded in a Raleigh blizzard for three days. Bought a family dog then bought a different one after the first one didn’t work. Planked for five minutes. Bought my first home, a one and half story stucco house near the lake in Provo. Got Google Fiber in said home. Rooted for these sports teams. Visited the Black Hills. Read the best science book ever. Enrolled in an amazing course on the world’s greatest thinkers. Survived (if not thrived thereafter from) my second back surgery. Got a “free get out from moving pianos” card from my doctor. 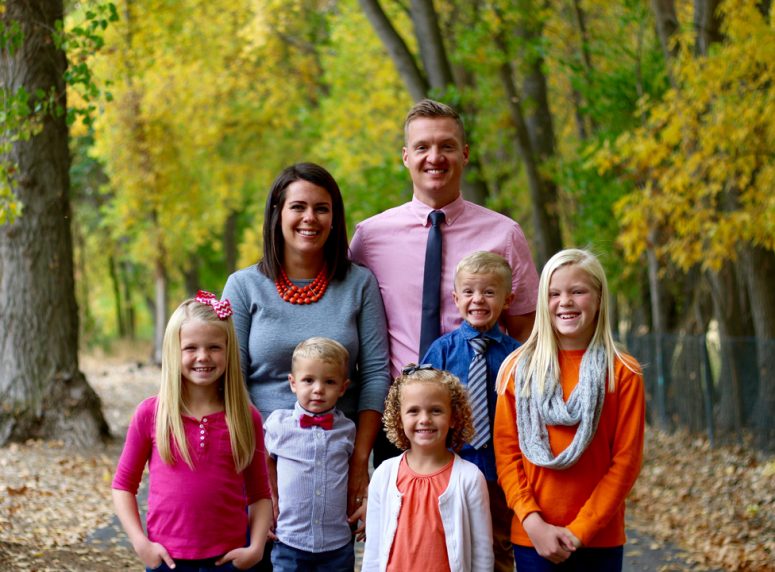 2015. Went to Disneyland and became converted. Took dance lessons with my wife. Witnessed the closure of the first three websites I ever wrote for (Infendo, Joystiq, GigaOm). Became a travel columnist. Learned to paddleboard. Bought a moped. Went flyboarding. Wake surfed Lake Powell. Safaried in Africa for the first time. Ate the best seafood in my life in Newfoundland. Learned a lot. Entered the prime of my life according to my mother. Realized the power of applause. Realized how to identify my feelings instead of masking them with anger. 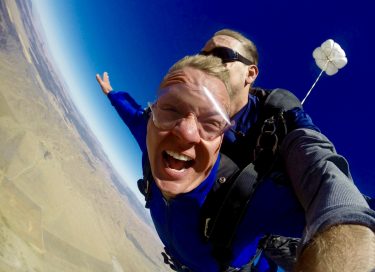 2016. Celebrated 13 years of marriage. Experienced the most adventurous year of my life: five continents, a dozen countries, and countless points of interest. Backpacked through Europe. Went skydiving and didn’t die. Interviewed a rock star. Chickened out on bungee jumping. Took the kids to Disney World. Fell in love with Orlando. Swam with dolphins—my new favorite animal. Started a journal that finally stuck.

2017. Hiked Patagonia with my wife and several more adventures with her. Taught our boys how to ski. Saw the most awesome display of clouds in my entire life while flying over Nicaragua. Fixed an insane number of flat tires. Caught the Hawaii bug with family. Won the inaugural couples corn hole tournament. Off-roaded the Shafer Trail in Canyonlands. Danced silent disco on an amazing Alaskan cruise. Family reunion in Yellowstone. Backpacked Ryder Lake. Went on daddy-daughter trip to Madison. Saw the most amazing sunset of my life in Anguilla. Biked through Europe with my oldest daughter. Went to Disney twice. Published my first book.

2018. Hiked 1000 year old trail in Japan with my wife to celebrate 15 years of marriage. Hiked Bryce Canyon, the Inca Trail, and Timp for my anniversary. My neighborhood became my village. Fell in love with pickleball. Went on two cruises; one unforgettable one with family in The Mediterranean. Watched green overtake Utah after unseasonably high rainfall. Reunioned with family at Bear Lake. Daughters all finished in top 3 state track finals. Watched France win one of the most thrilling World Cups. Fixed a flat tire. Survived 7 soccer games on a single Saturday. Beat bed bugs (twice). Had my book signing covered in the local newspaper. Visited Colorado National Monument for Thanksgiving. Made my eighth consecutive highlight reel. Fasted from electronics for a full week (again).

2019. Turned 40 against my will. Income dropped by 30% but adventure increased by 60%. Wife launched the largest non-profit soccer club in state history with 200 players. Skied my heart out in deep Utah powder,. Got stuck in an avalanche in Provo canyon. Swung from vines in Latin America. Stood among Saguaro in Tucson. Saw the St. Louis Arch with Jane. Jumped in a pool for my mom’s 70th birthday. Youngest son went missing for 25 scary minutes (and also broke his arm). Didn’t want to leave a family vacation in Cancun. Started my second book. Daughter raised $1600 for a field trip to Boston. Hair started thinning. Bought a gazebo for my backyard. Rafted the San Juan river with family. Ate blackberries in Seattle with my children. My dad suffered a stroke and lost some of his memory and motor skills. Felt mortality at my doorstep for first time in my life. Felt the full weight of The Force at Star Wars land. Finally bought a little truck. Visited extended family for two weeks over the holidays. Attended my sisters Christmas wedding. 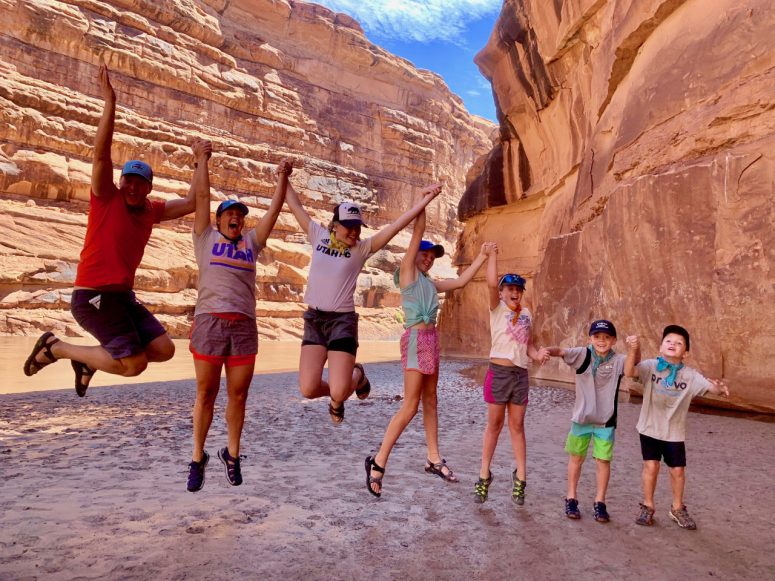 2020. Started off well until the coronavirus STARTED CRAMPING MY STYLE MORE THAN MY HEALTH!!

That is the best picture EVER! 🙂

(as in the first…sorry, should have clarified.)

Is “goodly” a term I want my kids calling me?

Oh I love all of those pictures. What a great family picture too! You guys really are all so good looking!!!

What a lovely American family. God Bless from Saudi Arabia.

I was hoping for a little more pager store references but otherwise a great read.

Jeremy, thanks as well, but I already wrote my pager story here: http://blakesnow.com/all-you-ever-need-to-know-about-employee-appreciation/

What a life–When I grow up I want to be just like you! Can you beat me in basketball yet?