As an independent contractor, I get asked a lot on how I make a living. The easiest answer is “I work from home.” If that doesn’t satisfy the interviewer, however, I’ll usually say “I’m a writer,” which is only partly true.

In many ways, I’m a jack of all trades. Writing and developing content for others is my forte. But I also enjoy critiquing software and games, moonlighting in online advertising, content marketing, and one-off projects that present a unique but hard-to-screw up challenge.

That said, I never over promise. I’m quick to tell a potential client or existing client “I don’t do that” when asked about other disciplines and send them on their way—mostly because I do crappy work when I’m not passionate about it. That and I refuse to engage in work I don’t like doing, regardless of how well it pays.

(Seriously, doing stuff you don’t enjoy solely for money or status is the epitome of living a lie. I realize some people have no choice in the short-term and often have to take one for the team to make ends me. But EVERYONE has a choice in the long term. It just takes planning, sacrifice, and guts.) 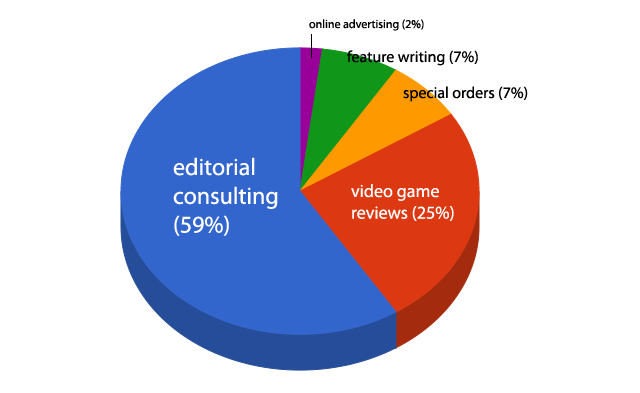 What does it all mean? Here’s the key to help you understand:

Since my interests slowly evolve every 5-6 years, I don’t expect to make a living the same way this year, or even next year, as I did last year. Nevertheless, that’s how I afforded my rock ‘n roll lifestyle last year while supporting a family.

On behalf of all you devilishly handsome Smooth Harold readers, here’s to a prosperous (but more importantly, rewarding) 2012. To that I say, “To the cyberspaces!” Or for those who work offline, “To the analogs!”