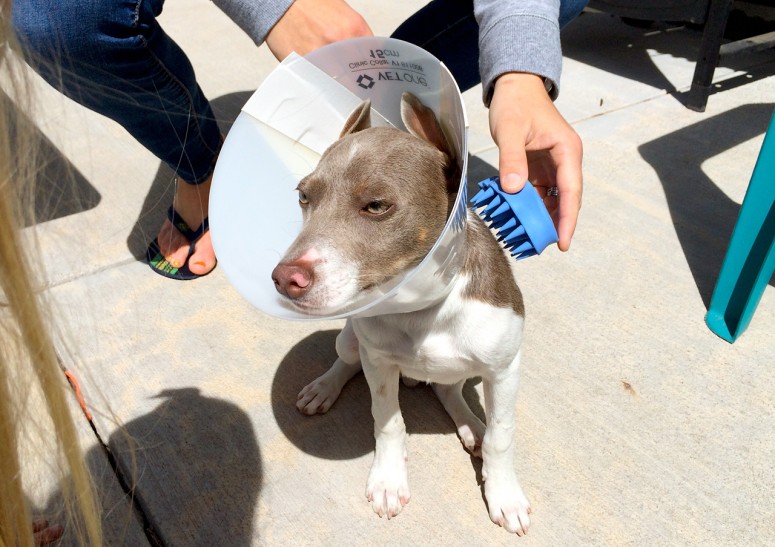 That’s Harley, the family dog. He just had his balls removed. Now he’s reduced to wearing this emasculating hat for a week to prevent post-op licking.

I think it’s funny. Harley doesn’t. But then again, he and I don’t see eye to eye on a lot of things.

When I told the story of how I became a first-time dog owner, I left out one glaring detail. As much as I love him, Harley isn’t the most mentally stable pup. He’s a tender little guy—disturbingly so. I quickly realized this the first time I met him. While observing him at the breeder’s, my thought process went something like this:

That’s a good-looking dog; better than his black and white brother. Why is he shaking though? His brother isn’t shaking. In fact, his brother seems to have taken immediately to us—tongue wagging, smiling, easy going—even though my kids are ringing his neck. This white and tan one with his tail between his legs and cowering demeanor doesn’t seem to like anyone. Not the kids. Not my attractive and sweet-smelling wife. Certainly not me. Is he trembling or having a mild seizure? I can’t tell. But he looks unstable. I wonder if he’ll adapt to a large family and dominating owner?

“What’ll it be, kids: the tan or black one?” I asked. The kids couldn’t decide and liked both, they said. Lindsey and I liked Harley based on looks. We liked him even more after the breeder said how rare his color is. “We only see this color once every 10 litters,” he claimed.

I turned to Lindsey. “You want the tan one?” She smiled and nodded. I did, too. “We’ll take Sir Shakes A Lot!” I exclaimed, immediately second guessing myself.

The pooch quivered the whole way home. Then the all-night whining started.

“I had no idea it’d be like this,” my wife mumbled in bed beside me. “This is worse than any of our babies.”

She wasn’t exaggerating. All of our newborns gave it a rest before the hour mark. That and newborn whimpers are A LOT quieter than Harley’s perma-cries and sporadic yelps. On the first night, he moaned and hollered for a good three hours inside his crate. For two of those hours, I firmly yelled from our bed into the dinning room, “Quiet, Harley, Quiet!” For the next several weeks, that became my clarion call: “Quiet, Harley, Quiet!”

It didn’t work. During the third hour, I took to Google and exhausted all my options on getting puppies and dogs to stop barking. Snout hold. Crate rumble. Mist water on their nose. And even the dreaded “crate earthquake,” which one trainer on petmd.com admonished to use “only as a last resort.” That didn’t work either.

The only recommendation that had a slight affect—and I mean the ONLY out of several dozen lists and lots of trying—was covering Harley’s crate with a blanket. But even that wasn’t a cure-all. He just lowered his whine from 5x the loudness of a newborn baby to 2x.

Out of options, I played the only hand I had left. “That’s it, I’m moving his crate outside!” I said to my wife in desperation. I placed Harley’s crate on the outside doormat. He continued to cry, but only for a few more minutes. Did the chill in the air take your breath away, Harley boy?!

It worked. The next night, he responded better to my initial calls for silence, before needing another outside reminder. The next night too, but he progressively improved until he was sleeping though the night without argument by the fourth night. Blake, 1. Harley, 0.

The tally for wetting my rugs and carpets is lopsidedly in his favor. Like all indoor puppies, Harley’s had to learn to “potty outside.” We decided beforehand to “crate train” him but were getting mixed results until my good friend Josh told us several weeks later, “Blake, you have to leave him in the crate at all times, unless you’re actively supervising him, he’ll keep tagging your floors.”

Since then, Harley’s only peed once in the last month. But that doesn’t account for his weak bladder. You see, Harley used to pee a little in excitment upon releasing him from his crate. Sometimes he’d energetically squirt some upon greeting us, but he seems to have abandoned that unbecoming trait as well.

He still pees a little when it comes to obeying my stern verbal commands. Usually he responds well to his doggy treats and click trainer. Other times, he tucks his ears, hugs the floor, and releases a few squirts in disobedience at the end of an otherwise successful training regime or when he knows he’s in trouble. It’s probably because I’m a loud, dominating, alpha male. That and I’ve spanked him out of desperation a few times.

If I’ve made Harley sound like a no-good dog, it’s because I’m a harsh and demanding critic. Harley is great dog. In fact, he’s convinced me that rat terriers are the only breed I’ll ever own. Just last week, he and I had a master-disciple breakthrough. With positive encouragement and a lot of unaplogetic prodding, he’s now running four miles, three times a week with the family.

My favorite part of those is the run home. “C’mon, Harley! See if you can beat me,” I’ll challenge him, sending him in a new, hyper fast terrier gear. I feed off his energy and lengthen my stride. In those moments, we feed off each other. I want to beat him. He wants to beat me (and usually does). When that happens, he stretches out on the lawn and smiles at me in victory.

More than just competitive camaraderie, Harley likes me, despite my intimidating nature and in spite of his timid disposition. He’s taught me forgiveness, impressed me with obedience, and respects the house rules better than some of my children do. He’s proof that tender personalities can teach us things that hardened ones can’t. And if I’m really being honest with myself, I’m a lot more like Harley that I’d like to admit. I just mask my insecurities better with shock value, volume, and bold language.

Although he’s just five months old, I’ve learned a lot from Harley. He’s already enriched my life. When he was in surgery, the house was quiet and a little less lively than it usually is. “I miss Harley,” I told my wife during his outpatient absence. “I do, too,” she said. With five children at home, it’s not as if we’re lonely. There’s something else to it.

As a coping mechanism in confronting the more difficult aspects of dog ownership, Lindsey and I often say, “He’s a freaking dog.” That goes for when he looks at us with big eyes wanting to sit on the sofa. Or asking for food from beneath the table. “Nope, you’re a dog—never forget that.”

But he’s really more than that. He’s not just another inferior animal, that is. Granted, I don’t think he’ll ever be as beautifully complex as humans. Of that, I’m certain. And I know he’s not as advanced as chimpanzees. But there’s a reason he’s earned the nickname “man’s best friend” above all other animals.

It’s been a privilege to experience that reason for myself.

This story first published to blakesnow.com on April 4, 2014

Just got around to reading this one. Good post!

I started out reading and thought that this would give me all the ammunition I’d need to keep our family from ever getting a dog. Read to the end, and now I want a dog 🙂