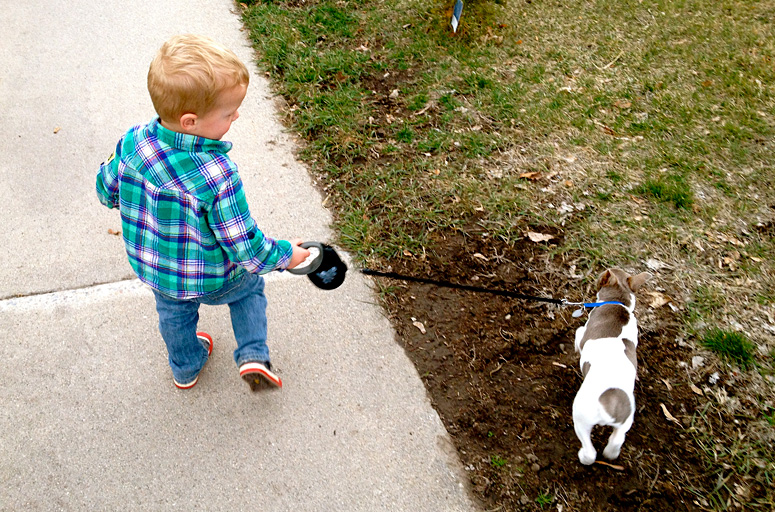 There’s a funny saying in journalism. You could publish the biggest exclusive story in the world — a major political scandal, military coup, celebrity scoop, scientific breakthrough, or life-changing event. But it still won’t reach as many people as a cute story about a dog (See also: The AP Guide to News & Feature Writing).

I was reminded of this recently while walking my dog. Although I’ve walked the block many times with my adorable toddlers, one neighbor in particular never took much notice when crossing paths. No biggie. I just thought she was a private but pleasant lady. She’d smile; sometimes wave. We waved back. That was the extent of it for nearly four years.

Until she met Harley.

“Oh, what an adorable little puppy!” she cried the first time she saw him, paying no mind to the equally beautiful underdeveloped mammals standing next to him. She kneeled down and gave him a good rub. Asked what race he was (How rude!). She cooed and fawned at him. She lingered for several moments, thanked us for sharing him with her, then continued on her way with a face much brighter than it was before.

“When the dogs come out, you’re not so private, eh?” I thought to myself. In truth, I was a little annoyed by the encounter. At first blush, it would seem a little rat terrier was more valuable to her than human life — child or otherwise. But that’s unfairly harsh of me. Maybe this neighbor just relates more to animals than humans. Many humans do. Who am I to judge?

But the experience did make me consider the value of life, human life in particular.

You see, I like my dog. I’m even starting to love him. He’s a wonderful addition to my family, except when he’s not (i.e. barking and wetting my carpet). But he’s no where near as interesting as the humans that surround him. His master control program is a lot more predictable and simian than the complex behavior and emotional capacity of humans. He can sit and come when called. But human tricks are a lot cooler than his.

Yet there he was, stealing the show. Leading the way as we followed behind, picking up his poo. As Seinfeld once joked, “Who’s running this place?!”