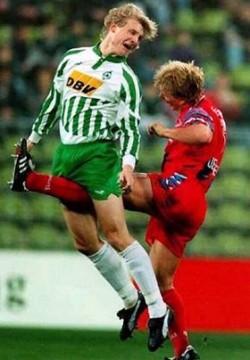 “Defense wins championships” is the dumbest thing you’ll ever hear in sports. Winning requires scoring and damage control, regardless of the competition. To prioritize the latter over the former is absurd. In fact, offense might be more important—not to mention more exciting to watch.

PelÃ©, the world’s greatest soccer player, also made this point in his biography (p. 280). Although his comments are directed at soccer, the same can be said of just about every other sport. “Why do I find fault with defensive football, when it obviously is the style preferred by many coaches throughout the world?” he says. “For one main reason: The only way—or certainly the most possible way—to score goals is if your team is in possession of the ball. Ball control, to me, is the most important tactic in the game, and defensive football trades ball control for apparent safety in the goal area, a trade that seldom gives the expect result. In defensive football, the goalkeeper will often kick the ball as far downfield as he can (known as “clearing”), simply to get the ball out of what he considers a danger zone. As a standard tactic, is this a good one? In my opinion, it seldom is. It sacrifices possession of the ball.”

He goes on, “The full beauty of the game is best seen in the inventiveness, the ingenuity, and the skill of the player both individually and in team combination, and this is only seen in an attacking style of football, where the ball is constantly under control. Kicking it the length of the field and hoping that with God’s help one of you own players might be there to head the ball into the net can scarcely be called artistic. Besides, football is a sport supported by the fans, the spectators… and scoreless ties are dull, in any game.”

The next time you hear someone exaggerate the importance of defense, kindly ask them how in the world they plan to win without scoring. It’s senseless.

Hm. You’re right; you can apply that lesson to much more than soccer. What a wonderful post! Thanks, Blake!