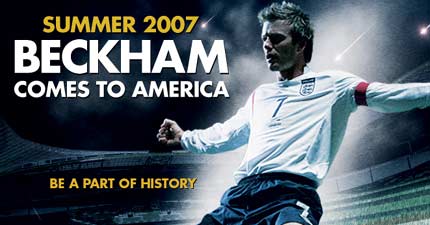 Deadspin opines on the recent $250 million contract signed by David Beckham to play in America: “So let’s call like it is: Beckham coming to America is great for LA clubs and restaurants, US Weekly and The Star, Adidas, Victoria Beckham (can a slot on “Dancing With The Stars” be far off?) and, of course, the haircare industry. As for the MLS, he will clearly put [fans] in the seats, at least in his first season, but will he actually raise the level of play? Not by himself.”

Not with a bunch of other soccer professionals either (think Pele and Co. in the late 70’s that came to play in America for the NASL). Soccer won’t take hold in America until it can award its athletes with fame, money, and respect, none of which it currently can. I like the sport, but so long as baseball, football, and basketball do a better job in providing said economic incentives, athletes who play soccer early on will soon jump ship to a more enticing sport. Oh, and you gotta kill the “soccer mom” if you ever want any cred.

amen on the soccer mom thing.

How much do you want to bet that more women will start paying attention to soccer?