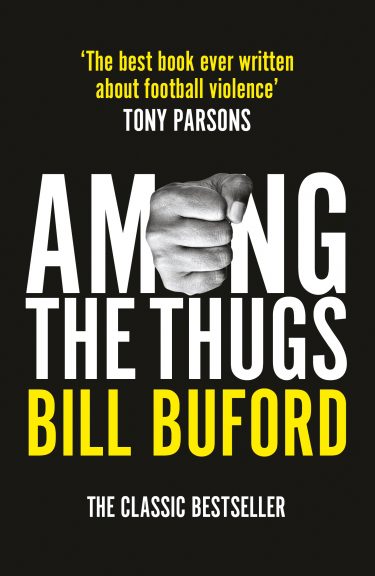 Sometimes I read something by someone that’s so brilliantly written, it makes me doubt my status as a professional writer. Bill Buford is one of those writers.

For years I’ve wanted to read his first book, Among The Thugs, published in 1990 about violent English soccer fans, but it was out of print or not in ebook form until I last checked this month. After securing a copy, I devoured the book in two days.

One critic describes it as “A grotesque, horrifying, repellant, and gorgeous book; A Clockwork Orange come to life.” I enthusiastically agree.

During the early chapters, I laughed out loud twice. By the middle chapters, I felt complicit if not guilty for reading such eyewitness horrors. I admired Buford’s honesty and vulnerability, both as a writer and journalist. As the New York Times noted in its review of the book, “Buford pushes the possibilities of participatory journalism to a disturbing degree.”

That’s because each of us become who we associate with. And after studying and associating with weekend thugs for eight years, Buford admittedly got close to becoming one. In that way, Among The thugs is an uncomfortable but important work on group think, violence as a symptom, and what can happen in overly proper societies when the root cause of problems are rarely addressed.

Five stars out of five, although it dashed my spirits for a couple of afternoons. These were my favorite passages: