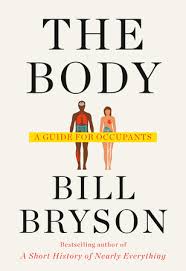 Over the holidays I read The Body: An Occupant’s Guide by Bill Bryson, one of my favorite authors. It is well-researched, captivating, and enlightening. It loses steam in the third and final act, however, which is why I dock it a single star, while still recommending it. These are my favorite passages: