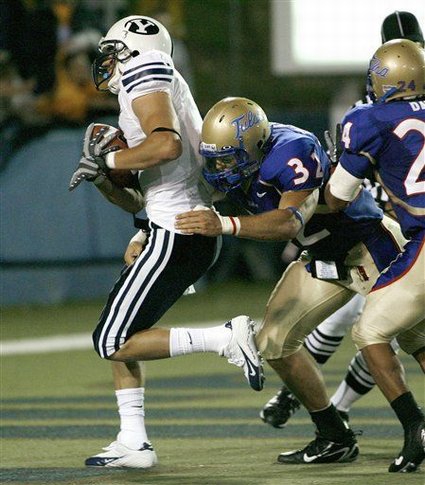 BYU committed 14 penalties for an unthinkable total of 138 lost yards in their 55-47 loss to lowly Tulsa on Saturday.

Said the coach after the game, “On the offensive side, we executed at our highest level.”

You did? Four sloppy turnovers and 138 lost yards (a large part of which were on offensive) are superlative execution? You’re living in la-la land if you think that, Mendenhall.

How about you make your entire team run 100 wind-sprints for every penalty committed, regardless of the offender? Do the same if not more for turnovers. Having never coached college football, I can guarantee those penalties, fumbles, and interceptions will rapidly decrease as a result.

You don’t have to win, just hold on to the freaking ball and don’t commit careless mistakes.

Mountain West Conference teams, BYU chief among them, have no case in whining and complaining about a lack of respect offered by mainstream media when compared to stalwart SEC, ACC, Big 10, and Pac 10 teams. How can you respect this kind of mediocrity?

The answer: you can’t.

I have to mention I prefer Utah to BYU, so seeing the Cougars suck it up against Tulsa did warm my heart a little.

Although I agree with the point that Bronco needs to have some more discipline with his team, that is not why the Cougars lost.

They lost because they have no speed in the secondary. Until BYU can get someone back there who can run, they will be vulnerable to teams like Tulsa with great speed at WR.

Funny how 1 week can change the attitude in the state about the direction of the two top programs.

I’m a fan of BYU, but I do not follow them religiously like some folks in Provo. Here are a few of the problems I think BYU has:

1) Max Hall makes too many rookie mistakes. He makes poor judgements on many of his passes and it will come back to bite him as the season goes on. His wind up to throw the ball makes him susceptible to Defensive ends stripping the ball, as in the last two games, which brings me to point #2.

2) The offensive line is too big and slow. Yes it’s impressive that they are large and experienced, but they are just too slow to compete with an athletic defensive end. I played tackle and guard and I would get reamed by my coach if I let players in the way they do.

3) Penalties! Two weeks in a row of penalties screwing up key drives, destroying momentum, and losing the game. I agree with Blake that my team would be running until they puked, I don’t care if they are coddled scholarship athletes, penalties, like personal fouls and false starts, show a lack of discipline. It looks like a Gary Crowton coached team out there.

As for speed, I agree a bunch of white secondary kids are going to be slower than a majority of the quality receivers, but that is no excuse. There are ways to level the speed advantage of a wide out, BYU hasn’t figured out how for years though.

How does this look in hindsight? I bet you aren’t writing negative crap like this anymore. Maybe you are. I can’t say because I really only read this one.

have you played the conduit on the wii yet, I was wondering if there were any other cougars out there that were playing it?
Levi
the conduit friend code 1763-0444-5303