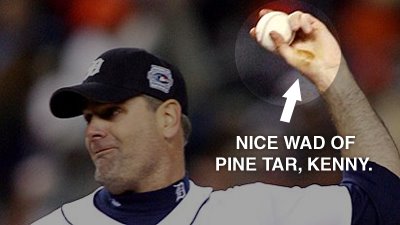 Note: I have been dishonest a few times in my life (okay, maybe more than a few times), but hopefully I’ve fully left the practice behind since my younger years in favor of piece of mind and an honest life. I also want the Tigers to win the World Series. But apparently, baseball and some of its journalists embrace and condone the practice of dishonesty, at least in moderation. Case in point: Last night in game two of the World Series, Detroit Tiger’s pitcher Kenny Rogers (yeah, the same guy that beats up cameramen) was asked to wash “something” from his pitching hand after reports by Cardinal batters claiming the ball was “doing something funny” during the first inning.

ESPN reports: “Rogers was spotted by the Fox cameras in the first inning with, well, something mucked all over his pitching hand.. by the second inning, he’d washed whatever it was off his hand.” In a post game interview, Rogers denied allegations that umpires asked him to wash a foreign substance from his hand, saying only that umpires came and told him how much time he had between the innings. He later admitted that it was “a big clump of dirt.” You just let a clump of dirt stay on your hand for the first 18 pitches of a World Series game, eh chief? I remember pitching in little league, and I could care less what was on my throwing hand. Happened all the time!

Worse still is how one Fox analyst reacted to the event in the post game. And I paraphrase: “It doesn’t matter what was on Roger’s hand in the first inning, ’cause he pitched seven excellent subsequent innings [which he did] after washing the substance off.” That’s brilliant. Hey kids, you can cheat a little, so long as you don’t do it for entire games. It’s not like a little cheating ever hurt anyone. Heck, you can be a 41 year-old major league pitcher having never learned the concept of honesty and lie to get an edge. The sport of baseball even encourages cover ups and acts like children when it comes to owning up to mistakes. So how many “little cheats” has Mr. Rogers previously performed to become the pitcher he is today?

At least one columnist got it right. Jayson Stark writes: “See, it wasn’t just his pitching hand that Rogers soiled on Sunday night. It was, regrettably, his whole sport. And that’s a stain that will take a lot longer to wash off.” Baseball- a great game governed by idiots.

You should have been a journalist Blake. Thing is, how do we really know what it was? It’s the exact color of pine tar, but it isn’t the exact color of the pine tar sticks that baseball players use. Those are white. Whatever the case, he still threw seven amazing innings (sans substance) and shutdown the Cards and the Pujols machine.

The part that gets fuzzy is it sounds like he lied about whether the umpire asked him to wash off his hand. His manger says yes, he says no. But, pine tar won’t just wash off in between innings without some sort of terpentine or gasonline or something. It’s sticky.

That guy’s got Married Mans Disease too. It must come from baseball, a game for accountants.