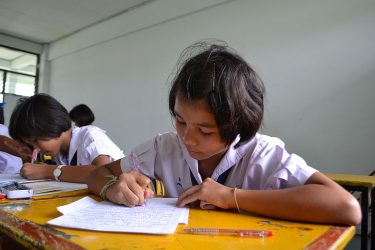 To improve the future of education, America must focus on science, technology, engineering, and math fields (aka STEM). We must also meet, if not exceed, international test scores.

Said focus has increasingly been criticized in recent years—ironically due to a lack of scientific evidence. After researching “hundreds” of reports from the past six decades, for instance, Robert Charette of The Institute of Electrical and Electronics Engineers said the so-called STEM shortage “is a myth.”

Similarly, Fareed Zakaria of the Washington Post labeled America’s obsession with STEM as “dangerous.” In fact, he argues that even though America has lagged behind international test scores since they first began in 1964, “that same laggard country has dominated the world of science, technology, research and innovation over the past five decades.”

The reason: In addition to being the land of opportunity for most of the world’s ambitious students, the American system teaches self-confidence arguably better than anyone else, Zakaria believes. When coupled with teaching critical thought, that trait leads to more tinkering, improvement, and bright ideas. “Critical thinking is, in the end, the only way to protect American jobs,” he concludes.

For his part, Charette says instead of herding students into certain fields, “we should figure out how to make all children literate in the sciences, technology, and the arts to give them the best foundation to pursue a career.”

In other words, the future of education will be determined by our ability to think objectively, which is the most scientific thing of all.

On a personal note, I believe flipped classrooms, MOOCs, and unbundling degrees are all good things. But in addition to updating what and how curriculum is delivered, the most important improvement of all will likely be how we train or retrain our wonderful, self-less teachers who are second only to mothers when it comes to rearing our young.