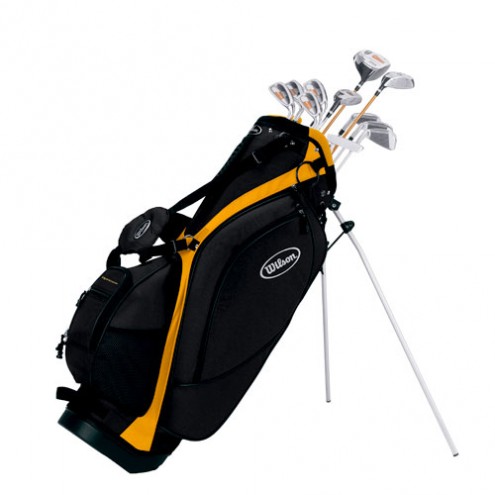 At my request, Lindsey bought me some recreational (aka cheap) golf clubs two years ago for Christmas. It took me a year, but I recently become infatuated with sport. I have “found religion,” you could say.

Anyways, last month I was whacking balls with my three wood at the driving range. After a slight miss-hit, I sent both my ball and club head flying into the distance. The ball went about 150 yards. The head went about 30. At first I wasn’t even mad. I was amazed actually. But then I got frustrated with myself.

Then the tiny business man that sits on my right shoulder chimed in: “Dude, Lindsey scored those clubs on sale at Walmart.com (pictured) for a $150 with free shipping. Assuming the bag cost $15 bucks, the 11 clubs couldn’t have cost more than $12 a pop.” He was right. Thanks to China, recreational clubs are crazy affordable now. Empowered with that knowledge, I easily shook off the loss.

Still, golf clubs hold incredible perceived value. While approaching the first green on Hobble Creek last week, I reached for my sand wedge for a short approach shot. But the dumb thing wasn’t there. I quickly realized that I must have left it by the last hole of the last course I played, which wouldn’t have been the first time.

The next day, I called said course, praying they had recovered my club. “It’s a Wilson Optimax,” I said into the receiver. “Let me check,” came the reply. A few moments later, a miracle. A kind golfer had discovered my club, after which it was placed in the Lost and Found. I rushed to the club house to reclaim my rod of tempered steal and rubber, and left as if I had just redeemed a brick of gold.

Funny Blake! Brooks has been taking up golf too. He got a set of clubs from play it again sports. Look at you two country club men!

Yeah! You should come play in St. George – and borrow Bruce’s sasquash driver. 🙂

I’ve been beginning to learn playing golf recently. Do you know what brand of golf clubs is best for a newbie like me? Thanks 🙂

I would just buy the cheapest set you can find to begin with. Quality equipment won’t make a difference until you find your swing. Good luck!