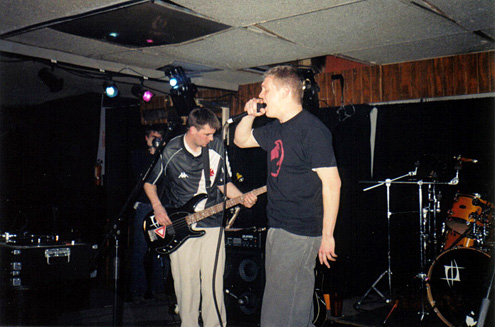 Before high school graduation, a mission, college, marriage, two children, and a semi-real job, I was an aspiring rock star. I learned to play guitar and wrote my first song at age 14. I joined my first band (a trio named Formaldehyde) at 15, as singer and guitarist. We were kind of a big deal in po dunk Carrollton at the time (insert smiley face). I even got stopped at the local Blockbuster and movie theater by adoring fans (for reals).

At 17, I discovered electronica and would put down instruments in favor of samplers, sequencers, and mixers for the next several years. Later in college, I rekindled my love of rock ‘n roll and played in two new bands: I was the singer and turntablist of a hard rock quartet named The Swing (pictured), and drummer in trio band that covered The Killers, G-Love and Special Sauce, Interpol, and Led Zeppelin.

The latter group tried to enter an acoustic “battle of the bands” in early 2004, but we were denied in tryouts because we “rocked too hard,” said one sensative judge, who was obviously more interested in playing boring Jack Johnson songs for his girlfriend than in bringing down the house.

So why am I telling you this? Because man — I’m still in the band! I hope you are too.

(By the way, I’ll see if I can scrounge up some YouTube videos for a later posting. Good times.)

This is the night I fell in love with a rock star.

I bet I have some Swing videos laying around we could put on youtube.

ah yes those were the days…i told you man, we should have gone with bubble toes 🙂

on second thought, it was worth it.

I’m totally still in the band, too, man. I know exactly what you mean.

But other than mindset, I’m also actually in two bands.

Wait….I’m confused. What band are you still in? When is your next show? Man we both look a lot skinnier in that picture.