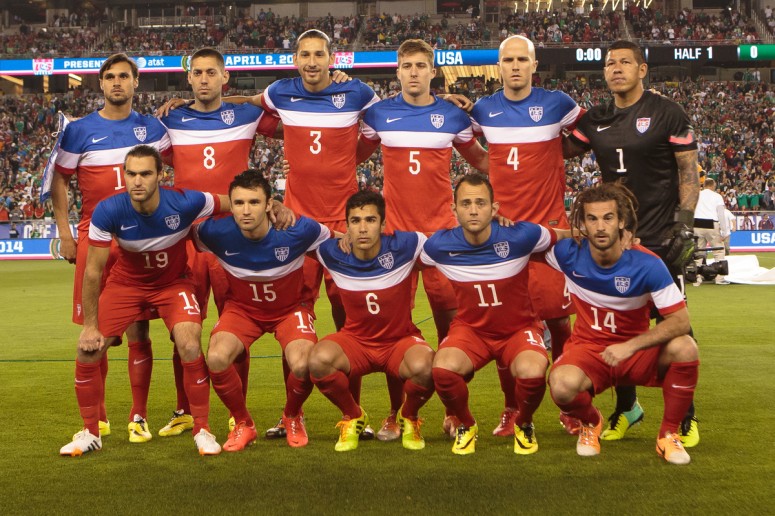 Although losing its first unofficial match 0-1 to Canada in 1885, the United States men’s national team beat Sweden 1-2 in its first official match played in 1916. Historian David Wangerin noted how the upset was achieved in my new favorite soccer book, Soccer in a Football World:

Sportswriter Carl Linde observed how much ground the American forwards covered and how their sheer willpower often compensated for a lack of technique. Linde claimed this style represented “a new way of playing” and that the visitors “form a very dangerous team, mainly through their primitive brutality; through their speed and through their will to win at all costs.” Another writer remarked that such energetic play made the home side Sweden look as though they were engaged in “exercise for older gents.” (p. 85)

After the game, U.S. coach Thomas Cahill added, “We were outclassed by the Swedish players on straight football. It was American grit, pluck, and endurance that won. No great football stars were members of our team, but we had the pluckiest aggregation ever banded together.”

To this day, America still plays a more primitive game when compared to giants such as Brazil, Italy, and Germany. You have to respect that. Otherwise you’ll slow play it as the underdog, ineffectively counter attack, and ultimately lose playing better opponents. This, I fear, is what U.S. coach Bob Bradley will do this summer to our team’s eventual demise.

Understanding our lack of skill, then, is half the battle. The other half is forming a winning strategy around that realization, one that exploits the most dominant convention in international soccer today: gentlemanly play.

Whenever we play with speed, grit, and willpower, we become “a very dangerous team,” capable of upsetting just about anyone. Think England in 1950. Think mid ’90s wins against Columbia and Argentina. Think Portugal and (almost) Germany in 2002. Think an Italian draw in 2006. Think Spain in 2009. Every time I have seen America play above themselves, it has been realized with relentless aggression—with “primitive brutality.”

The strategy doesn’t always work. Brazilians do not play a gentleman’s game like the rest of the establishment. And so our speed and scrappy strategy only held up for a single half last summer when we lost to them 3-2 at the Confederations Cup. To beat them, we’d need to conjure up another underdog strategy.

But I’ll lose to Brazil every day of the week with my head held high, at least until our skill level fully matures (which could take another couple of decades). What I won’t stand for is trying to beat Goliath at his own game—going face-to-face, toe to tow with him—which is what some American pundits and romantic sport strategists think should always be done. As outsiders in any competition, it’s a losing strategy. You do that, you lose 72 percent of the time.

But if you play with unconventional bravery, and field a team that buys into that strategy whole heartily, magic happens more often than not. It’s how underdogs increase their chances of winning.

David knew this. If we want to succeed on the international stage, we should too.