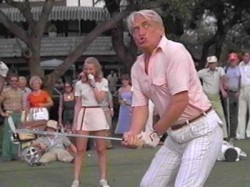 I uncharacteristically watched the PGA Player’s Championship last weekend. I usually find golf on TV to be dreadfully boring. But I actually enjoyed it this time. I even plan on watching more. But that’s not what I’m here to say. I’m here because I’ve got a bone to pick with the allowance of caddies in professional golf. Here’s why:

Now I have nothing against caddies. I think they’re doing a wonderful job helping their employers shave a few strokes off their game. But that’s precisely the point. Golf is obviously a non-team sport, so why let pros use caddies? I garauntee a lack of caddies in professional golf would make the sport much more exciting. Am I wrong?

I couldn’t disagree more with you on this one. I freaking love Caddies and what they bring to Golf.

1. When most people play golf on a regular basis (more than a couple of times a year), they either rent a cart or have a hand cart with wheels for their clubs. That’s no different than letting a Caddy carry your clubs.

2. Even though the players consult with their caddies every shot, the player still has to execute the shot. Golf is intrinsically hard. You start hundreds of yards away from a 4 inch hole and are expected to get it in that hole in 3 to 5 shots. That’s why most people suck at golf. Aside from tennis, every other sport that I can think of has a coach that gives input to the players during a match. Maybe tennis should allow some coaching instead of being the black sheep of sports.

I know you hate on Caddies, but I am really liking this golf season. It seems they are putting a microphone in the huddle between the player and caddy this year and I find it interesting to hear the wisdom a caddy can have.

I really wish I had a full time caddy.