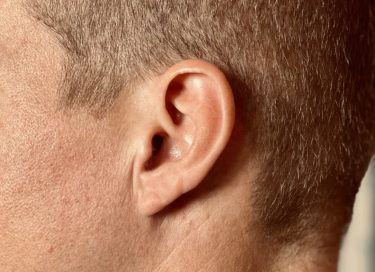 Last year while recording Mr. Mustache, my debut album produced in quarantine, I permanently damaged both of my inner ears. While making the record, I listened to my headphones at volume 8-9 for four straight months. Every day. My ears have been ringing ever since.

Near the end of the recording process, the high pitched “tinging” started. I had also started playing in a live band then but wore ear plugs without realizing that I was letting the problem in the backdoor at the same time.

I read up on the ringing, and after speaking with two permanent “patients,” it was obvious I was suffering from either temporary or permanent tinnitus (pronounced tin-uh-tis). Time was the only way to tell which version I had. All the medical literature says if the ringing stops after 2-4 weeks, the ear cells were able to heal themselves and you’re good to go. If they don’t, the ringing will never go away, according to the latest research. Mine never did.

Obviously, permanent tinnitus, especially in both ears, is an incessant annoyance. But I’ve adapted well. And I’m grateful my ears alerted me to the issue before I was made deaf by music, as the tragic but still hopeful Sound of Metal movie so beautiful demonstrates.

What’s more, I haven’t suffered any noticeable hearing loss beyond maybe 5% clarity. Over my ringing ears, I can still hear the soft breathing of my wife lying in bed next to me or even distant sounds. Although the ringing hasn’t gone away in nearly a year, my hearing remains largely intact.

There’s a very specific reason for that. The ringing is by design! The way it was explained to me, ringing ears are like the hissing you hear on a radio while changing the station in search of something new. Similarly, ear cells change their frequencies, if you will, to make up for the loss of damaged cells. The living cells actually re-tune themselves (or ring) in an effort to listen more acutely with the remaining cells at their disposal. Magic I tell ya!

While I wish I never harmed my ears like I did, I often feel gratitude whenever I notice the ringing. It’s proof that my body and maker (be that God or evolutionary biology) care for me more than I car for myself sometimes. Isn’t that comforting?

TL;DR: Don’t blow out your ears, wear protection, and be grateful for how the human body adapts to survive.