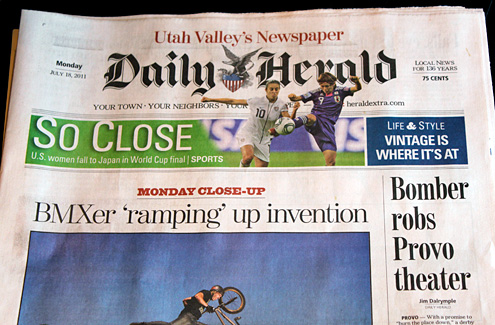 I decided to find out first-hand by ordering a daily subscription two weeks ago. After 14 issues, here are 10 surprising things I learned so far:

So is it worth subscribing to a local paper? So far I’d say yes. That may change if I’m asked to pay the full cover price of $11/month once my discounted subscription runs out.

Admittedly, even that’s not a lot. But it’s more than an unlimited Netflix subscription and certainly more substantial than the completely free online edition. As with every purchase, it all comes down to value.

That said, I’ll reserve final judgement and let you know what I ultimately decide when the time comes.

Hey — thanks for this review! I just might subscribe to my local paper as well. I’ve always wanted to be like Pres. Hinckley, who read the paper every morning, early in the morning. 🙂

I’m sorry, but you left out the most important parts of the newspapers: The comics and the Jumble!!

I’ve subscribed to my local paper in the past. My biggest problem was that it stacks up pretty fast. A good alternative down here is to get once or twice weekly subscriptions.

I definitely think the design of newspapers (all that I have seen from local to national) have improved greatly. In fact, it’s worth designers picking some up just to get inspiration. There’s a lot there that would translate well to the web.

With that said, my local paper puts most of its stories online. So, I can hit Google News and get a local section that pulls from my local paper, local TV stations, and a few local independent, alternative papers. The end result, I get better local news online. Even with food reviews, I have found better stuff on Urban Spoon and some local foodie blogs.

But do I think newspaper is dead? No, just changed.

[…] and gets a printed newspaper delivered to his door every day, check out my buddy Blake’s blog Smooth Harold for the […]

Being that I live in New York City, my local paper is basically national news; not to mention the price is astronomical! I would rather pay $5 and subscribe to the Daily Harold in your state!

Side note, perhaps if your paper cost more than $5, you would have better writers. Or maybe you could start writing for them…