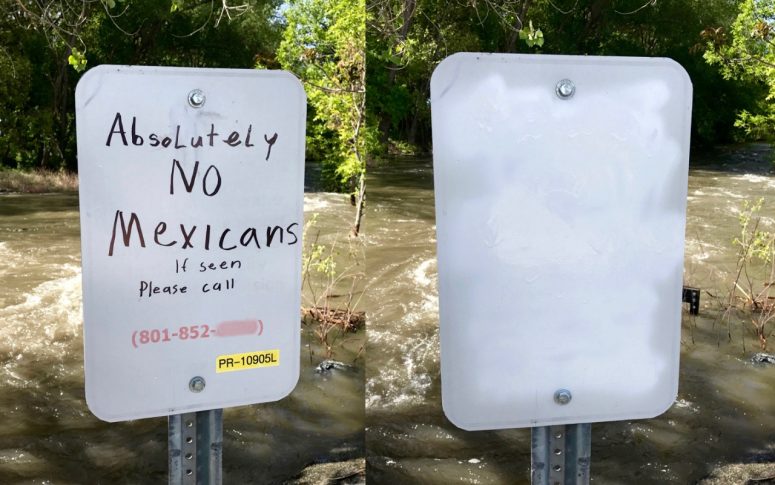 My family and I encountered the pictured sign recently while biking our river trail. Immediately the older children collectively remarked, “That’s sad.” My wife and I agreed. So we went home, grabbed some spray paint, and returned to censure the offending message and alert the authorities to replace the defaced sign.

By the looks of the handwriting, the up-to-no-gooders were probably teenagers and likely less-educated. Young minds exploring anti-social behavior rather than full-blown racists. Nevertheless, the words still stung. But I was proud of my children’s response. Not anger. Not over-reaction. Just concern and an immediate quest to right the wrong.

It’s always jarring to encounter public ignorance, more so in an area of the country not known for its racism. Although we will never entirely root out ignorance, especially as we protect the right of free thought and corresponding speech, the experience reminded me that there are more decent people in the world than indecent. And often the latter are just finding their sea legs on their journey to becoming decent.

If I could share a message with any international readers, it would be: this is not who we collectively are. Most of us would rather raise our children alongside hard-working hispanic, latino, or any other migrant Americans than entitled traditional American ethnicities.

I say this because a better tomorrow isn’t given or passed down. It is earned.

The good news is today is better than yesterday, at least statistically speaking. We’ve worked hard to improve our collective lot. And having worked with and currently raising several remarkable children, I believe the world is in good hands. Tomorrow will be better than today.

No volatile president, teenage vandal, or scaremongers will ever change that. We simply outnumber them and will do our best to convert as many as will listen to our righteous cause.