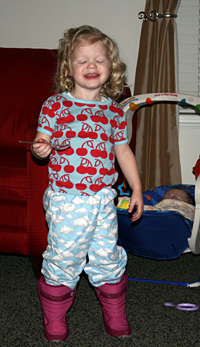 I used to dance with Lily when she was a baby, and she loved it! In fact, I don’t know that I’ve ever known a little kid who didn’t like to dance. It is amazing — it’s something people want to do almost immediately when they come into life. They want to listen to music and dance . . .

That picture of Sadie is real cute. 🙂

Stop, drop, shut em’ down open up shop! I think some of my best memories from the mish had to do with you, me, and music. Remember when you and I were studing one morning and started singing the beat to a Daft Punk song. Classic.

Your cute girls look so much like your cute sisters! Maybe it is just the way the picture is taken but for a second I thought it was Sara when she was little!

Incidentally, I think dance may also be inherited. Jordyn is always fluttering around the house and dancing to any good music she hears. She has to get it from Jackie . . .