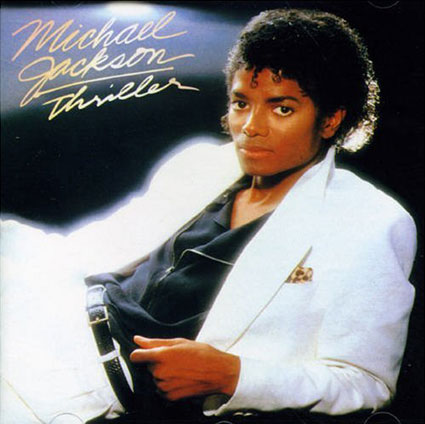 His seminal album, Thriller, was released 25 years ago this week. Selling an unthinkable 104 million copies worldwide, it’s still the second most widely purchased album of all time after the Eagle’s Greatest Hits.

It is impossible to listen to this album and not bounce your head, rock your hips, or move your feet. Although difficult in picking just one, I’ll say Human Nature is my favorite song from this well-aged record. It’s a shame Jackson wasn’t as talented offstage.

I’m tempted to get the new version of this. The old cassette copy of my sister’s high school boyfriend’s LP is long gone! (K-Mart brand tapes FTL!)

Human Nature is really great! But I think PYT takes the cake! I have to get up and dance to that one whenever I hear it! Oh that whole album is GENIUS! It is funny that I wasn’t even born when that album came out, but it has made such an impact in my life.

This is the first album I ever owned. My dad took me to Raspberry Records and I got the cassette when I was probably 5 or 6.

Blake you just reminded me how much I’ve always wanted to be in a MJ cover band named Jycal Maxson.

Although every song is good, if I had to pick one, I’d go with the old school classic of Billie Jean as my favorite off this album.

I personally think people should just leave the man alone he is gone now and they are still giving him abuse .. i dont think he was pervet but i do think his father messed him up because he was an adult by the age of 6 so he has never grown up .. he was just a child in a mans body .. but his music is awsome he has a real talent i like all of his music.

I will surely miss Michael Jackson, he is really worthy of the name King of Pop and he is certainly one of the greatest musicians of all time…