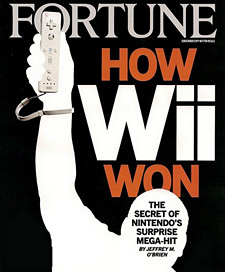 “The continuing popularity of the video game known as Halo, exclusive to Xbox, kept Microsoft in the top ranks of video game makers. The release of Halo 3 in September 2007 set record first-day sales of more than $170 million.”

So the biggest story in video games (personal preference aside) over the last 18 months through October 2007 (the earliest the entry could have been updated) was not Nintendo Wii but Halo 3, according to Encarta. Who spilled conflict of interest on my information?

Whether intentional or not, it doesn’t matter. I wouldn’t expect a Nintendo-owned encyclopedia to accurately portray the reception of a competing product — which makes this multinational world we live in all the more crazy.