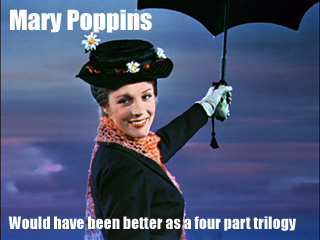 The recent trend of making movies into trilogies — or better yet, four part trilogies where the third movie is bifurcated into two even more drawn out movies — is really the best thing to happen to cinema since at least technicolor, at most sound.

In fact, I think audiences have really missed out on a lot of epic, multi-part stories. I mean, mini series were big in the ’80s, for crying out loud! Couldn’t Hollywood see the writing on the wall? Skate to the puck a little sooner?

Even better, they should have started making trilogies a half a century earlier. Can’t you just imagine the possibilities? No?

Consider this: “The Mary Poppins Saga.” (Rolls off the tongue, doesn’t it?)

Here’s how I would have done it. After the original, when Mary flies off screen with her umbrella, she heads overseas to nanny a pair of bratty American kids in a sequel (aka saga part 2). Clever, huh?

Then, for saga part 3a, Mary would return to Jane and Michael and the rest of the Banks family after parental negligence began brewing once more. London not so swinging, if you know what I mean. The world of high finance and steppin’ time hanging by mere threads!!!

The conflict comes to a head, of course, and then BAM! Leave the audience waiting another year for the exiting conclusion of saga part 3b. “Mary Poppins: Now more than ever!” would be the tagline. Or maybe something like, “Mary Poppins: When everything you know is wrong.”

Anyways, that’s just one in a million ideas. What other movies should have or should be made into four part trilogies? Anyone?

We watched that this past weekend, too.

How about A Charlie Brown Christmas? Part 4 could be all about getting rid of the tree, only to start a debate on disposing of trees and other holiday related paraphernalia in a landfill.