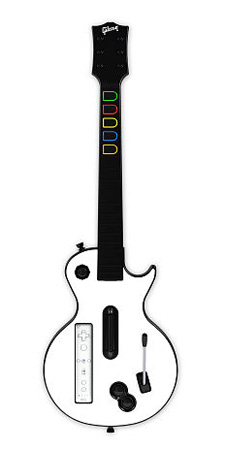 I don’t follow games much, but I play both of these. I thought they were from the same company.

Rock Band is more enjoyable to me, but I look forward to seeing what Guitar Hero: World Tour has to offer.

Kevin, did the “in America” not qualify my OG statement? 🙂

I’ve found Rock Band to be my favorite of the bunch. I loved the first two Guitar Hero games, but once Harmonix left, I felt like the soul of the game left as well. GH3 seemed to be more difficult just for the sake of being difficult, and the visual style of the characters creeped me out. Rather than be about the music, it became about who could just move their fingers the fastest.

Also, the DLC is what makes me love RB even more. I bought 4 or 5 songs for GH2, but once news of GH3 started making the rounds, Activision apparently decided that GH2 wasn’t worth their time anymore, and the DLC disappeared. In contrast, I purchase about 1 song a week for RB.

At least with my friends and family, RB has become the party game for us. When something can draw my grandma into playing a video game (she likes drumming), it’s a winner.