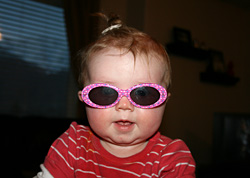 I returned home from a press junket to Baton Rouge on Wednesday, and here are some thoughts I haven’t had time to talk about:

Have a great weekend, everyone.

did you get to go to the chimes?

YES! The blackened alligator (as stated above) is awesome!

I’m from Baton Rouge, but if you really want to see the “Mecca” of fried food go to the Texas State Fair in Dallas. They actually have found a way to fry Coca cola!