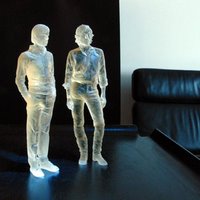 I like music. I like it even better in iTunes. So with that, here are the artists, albums, and songs heavy in my rotation for early 2007 ordered by ones I’m listening to the most. Nota bene: these aren’t necessarily what have been released in early 2007, just what I’m currently listening to:

Of course, my playlists are also peppered with 80’s, classical, and a bunch of other stuff, but this is what has my attention as of late. I’m also anticipating Air’s new album due March 5 (new single here). Mmmm. Air. What are you currently listening to?

My listening pleasures have been the new albums from The Shins and Bloc Party. They are both better than I expected.

Of course, I also keep going back to last year’s albums from Mew and Muse and The Decemberists and Lily Allen and The Knife and The Killers.

Looking forward to the new Modest Mouse, Kaiser Chiefs, and Maximo Park albums this spring. Air is a must get, too.

Oh, and Blake, if you like Air & Phoenix, go to France this summer:
http://www.pitchforkmedia.com/article/news/41304

I must agree with the Bloc Party recommendation. Although Rolling Stone gave it bad reviews, these guys’ melodic mixes are addicting.

Nina Nastasia – On Leaving (Why Don’t You Stay Home)