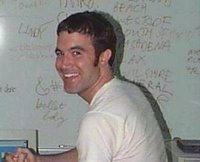 A little update on how fast My Space grows. Wikipedia: “According to Alexa Internet, Myspace is currently the world’s fifth most popular English-language website and the fifth most popular website in any language, and the third most popular website in the United States… The company employs 300 staff and does not disclose revenues or profits separately from News Corporation. With the 100 millionth account being created on August 9, 2006, in The Netherlands and a news story claiming 106 million accounts on September 8, 2006, the site reportedly attracts new registrations at a rate of 230,000 per day.”

that is just nuts, completely unbeleivable

Maybe with all that undisclosed revenue coming in, Tom can go out and buy a nicer t-shirt for his profile picture.

Personally, I’m a fan of Facebook more than My Space. It’s not nearly as popular, but it feels a little more “grown up” than My Space. Less glitter, less sparkley graphics, less obnoxious music playing when profiles load.

Those stats, including the 230k sign ups/day, are all from an August 06 CNN article. I’d love to see how it’s changed in the intervening 8 months.

(I prefer Facebook, too. Of course, I’ve never had a MySpace profile.)

I agree with the Facebook statement. MySpace is pretty trashy, if you ask me. But what phenomenal growth. I don’t know whether I should be amazed or appalled (because obviously the general public cannot tell that MySpace is completely devoid of good Web design AND class). Perhaps I’ll be both.