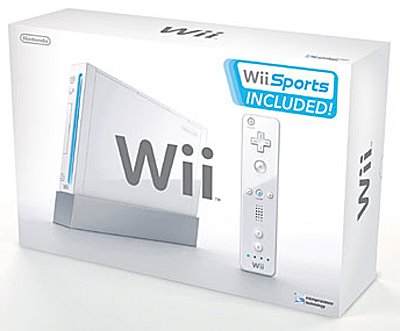 Nintendo officially announced their upcoming game console entitled Wii (pronounced “we”) today that will launch on Nov. 19 for $250. What makes this system unique is that the company is marketing it to both gamers (read: me) and non-gamers such as my mom in an effort to expand the video game market. To do this, the console leverages a motion sensing controller (pictured) that looks more like a TV remote and works in 3D space, meaning, no more using complex button schemes to move on-screen objects.

I had a chance to play a prototype unit back in May at a games conference and was extremely impressed. It is one of the most intuitive software interfaces I’ve ever used. The new console is bundled with a series of minigames including tennis, baseball, bowling, golf, and boxing all catered to the non-gamer. Wii will also allow owners to download and play games from all of Nintendo’s previous systems and features built-in wireless for web browsing, news, weather, messaging, photos, and videos all using the pointing device.

For the non-gamers out there, is Nintendo’s intended approach at all appealing?

I don’t consider myself a gamer since I only play once every two months or so. But, even non-gamers know the name Nintendo and likely associate Nintendo with gaming.

I worry that Nintendo is trying to do too many things and be too many things with this machine. the new control may cater more to non-gamers, but will they alienate traditional gamers by doing this? Don’t know, just thoughts?