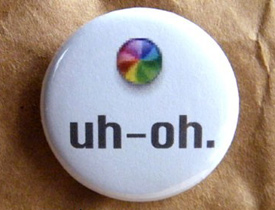 Amen! I love when people get into the Windows vs. Mac fight on what OS is more stable. I’ve been on Macs the last 6 yrs, and the “Macs never crash” argument you hear is bunk.

Down with the beach ball!

Just to add a little perspective – The beachball on a mac is equivalent to an ?hour-glass on a PC, NOT anything like a blue screen of death, which is the whole OS shutting down to stop it causing permanent damage to itself!
The beachball is often a brief occurrence (although sometimes a permanent application failure), while the blue screen of death never goes away on its own (it needs at least a compete restart, with data loss etc).
Macs do also have a kernel panic, like the blue screen on PCs, in fact they now seem to have 2 different types I have read about – one is an unhappy looking mac (the old all in one box type mac/screen), which usually means there is a hardware problem.
The other is a multilingual greyscale splash screen with a power sign on it. I have witnessed both myself – I saw the latter twice after a I made a serious bodge of a system reinstallation, and I’m sure I remember an unhappy mac or two I saw with an old macbook about 15 years ago on Mac-OS 8.
Don’t get me wrong – macs crash too, and Apple often seem almost as oblivious to the fact as Microsoft, but macs usually hang a single application, or (just recently) sit waiting, unresponsive until a network event (remote disk mount most common for me) finally concludes. Rarely do they hang the whole system, and usually you can recover from the event by pressing CMD-alt-esc, like the ctl-alt-del on a PC, and forcing an offending application to quit.

At least my spinning beach ball is more entertaining that your hourglass.. And Macs crash in 4 different languages!

Yeah, this is retarded. The spinning wheel is the equivalent to the hourglass, and the hourglass appears much more often and is much more frustrating. And if it does freeze, which happens on Windows ALL the time (control, alt, delete anyone?), all of your stuff is usually saved if you have to restart it. Macs hardly freeze, Macs don’t have viruses, and Macs stay faster for longer. So yeah, I’m still gonna go with Macs for the win. This is an inappropriate comparison. And everyone I’ve met who defends PCs usually are IT nerds, or suck as people, or both.

When you do get the spinning beach ball you can move it around and click off the application or if push comes to shove you just command tab/4 finger swipe and you can select a different application then go into the force quit and quit the application that isn’t responding. It’s really a quick and easy fix as opposed to just about any slow down on a windows computer.

The same happens to me on windows… Since XP. So you really have no point.