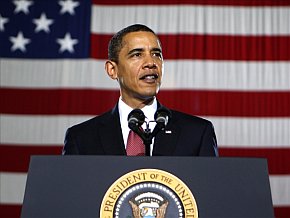 You would think it would be a good thing for students to hear the President of the United States address them personally. But nooooooo, conservative Republicans who oppose President Obama still aren’t civil enough to acknowledge him as president and let their kids hear the age-old “Work hard and stay in school!” spiel from the world’s top political authority.

I guess they think the President will sneak his big government ideas into Tuesday’s broadcast (“Hey kids, tell your parents to support my still undecided healthcare plan!” or “Isn’t it fun spending all this tax payer money on corporate welfare??!!”). The AP reports that liberal Democrats did the same thing in 1991 (surprise, surprise) when President Bush addressed American students—behavior that is equally petty.

Mr. President, I think your fiscal policy is a joke—your spending scares the crap out of me, actually, as did your predecessor’s. And I disagree with you on other issues as well. But I respect you as President, I hope to learn from you during your tenure, and I would be honored to have you address my children.

I just think that it’s alright that parents want to keep their children from hearing it. It’s what is meant by having a free country.

Plus it goes beyond Republicans and Democrats. I personally would keep my kids out to show that I do not support his other policies. The message is probably fine, but think of it as another way to protest the things you don’t agree with. BTW, if this was Bush, I would probably not let my children hear him speak either. Until government can get out of the way and downsize and get spending under control, I will protest as many events as possible including this one.

As one who opposes the speech, I’ll clarify that I find more danger in 1) the supplementary materials and encouraged discussion regarding the speech, 2) the framework such a speech encourages (i.e. federal hands on education, a president doing anything he wants, a direct conduit of communication to the youth of thenation, etc.), and 3) the lack of authority the President has to do anything like this to begin with (see here). I’m not so much concerned w/ the words as I am w/ the speech itself.