I have been meaning to post on this for quite sometime. I got a new job! We’ll, sorta. I’ll still be working on Griffio (my baby), but I’ve started work with a local business incubator dubbed Provo Labs coming in as a web strategist (or Assistant Janitor maybe, I’m not sure). I’ll be heading up various projects including online marketing and distribution for the group’s several start-up companies, mainly through the ever so popular blogosphere, as well as building good ole fashioned websites. 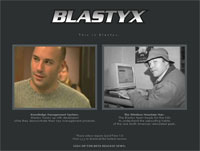 The new company was founded by Paul Allen. Not Bill Gate’s sidekick but a famed Utah entrepreneur that also co-founded Myfamily.com back in the day. The team I work with is top-notch, and I’m very excited to help out where I can. The first project I’ve been working on is a beta company dubbed Blastyx (pictured). All I can say is that it’s some of the freshest video production hitting “cyberspace” right now. Very cool stuff, and we’re excited to get it off the ground.

I’m also in talks to have a part of Griffio acquired by the incubator. It will allow me to take my growing little company to places it’s never been. Bigger. Faster. Harder. Stronger. I will remain “chief” something as we hope to become Utah’s premier Web 2.0 company, developing sites that Mr. Tim Berners-Lee originally intended for when the web was first created back in ’95. We’re already off to a great start leveraging solid site markup, fresh scripting (AJAX), community content, and proven web usability.

To slightly paraphrase the renowned Sir Isaac Newton (1642-–1727), if I get anywhere in life, it will be by “standing upon the shoulders of giants.” Many thanks to my wife, family, friends, former business partner Robert, the clients that put their trust in me, teachers, and anyone else that has supported and/or challenged me.

Congratulations, Blake. I saw “by Griffio” on the bottom of the Blastyx site and wondered what had happened — that’s great news. You’ve brought a definitive style and brand to your sites, so I look forward to your influence on the Provo Labs sites.

I’ve always been impressed by your ability to get things done. It seems like everytime I take a look, you’ve gotten something else done. Each time, it’s something bigger too.