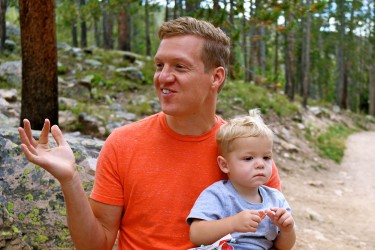 I was recently interviewed in Work & Money about paternity leave. While the story was edited for brevity, this is what I said in full:

Can you tell me more about your paternity leave? Paid, not paid? How much time did you end up taking with each child, and how did you make sure work responsibilities were covered?

​I work for myself so it was basically unpaid. With the first two children I only took off the day of the birth. With the later three, I took a full week each time and am glad I did. I worked a little overtime before hand to make sure I had everything in order and then turned on an autoresponder ​during my absence. 99% of the coworkers are more than understanding, I found, and the 1% who aren’t you probably shouldn’t be working with anyways.

You said you regret not doing so with your first two children. Why is that, and why did you only take a day or so at the time?

​I was too busy seeking fame and fortune to understand the importance of what was happening. I took slightly more interest with the first child since it was a new experience, but I remember very little about my second child’s newborn month if not first couple of years. As a father I feel bad about that but I’ve mostly mended my ways so that negative start actually made me a better father today.

What were the pros of taking leave to be with your family after a new baby came along?

​Unity, solidarity, and support. I can’t imagine what women go through when sacrificing their bodies for the future of humanity, one baby at a time. The least we can do as husbands and spouses it to make that sacrifice as easy as possible and to work as a team to bring little ones into this beautiful world. The spirit in our home was one of greater love, understanding, and togetherness with the latter three than first two.

What were the cons?

​I can think of none. Most business emergencies are invented rather than actual. The only real emergencies involve risk of serious harm, life, and in a business sense, tens of thousands of dollars. I didn’t experience any of that during my paternity leave and again, 99% of people are very understanding if not congratulatory with new babies. We all used to be one, after all!

Did you have any regrets about taking time off?

Did you worry about work when you were away? Did you check-in, or stay off the grid?

​Off the grid minus an email or two that helped advance the more important projects I was working on at the time.

Financially, were you in a good position to take the time off? Was that an issue or a concern at all for you and your family?

​I was, thankfully. I realize paternity leave is a privilege, not an entitlement, and my heart goes out to those who are unable to do so. In those cases, however, I believe the unity, solidarity, and support can still exist, but it would require more sacrifice on the part of both the mother and father.

Thanks, Julia, for including my remarks.