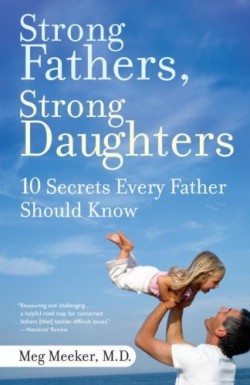 As the father of two girls, with another on the way, I’ll take all the help I can get concerning their well-being and development. And although it could have been written using fewer words, the 197-page Strong Fathers, Strong Daughters was an enlightening wake-up call to some of the challenges my daughters will likely face. After reading it, I felt empowered and reassured of the fathering techniques I already held to be true.

Written by Meg Meeker, a child psychiatrist and mother of four, the book is peppered with personal stories and alarming statistics. The stated “10 secrets” aren’t really secrets as much as their are good advice. To summarize, they are as follows:

For its concise sentences and scientific approach to raising daughters, I give Strong Fathers, Strong Daughters three stars out of five. Recommended to any father seeking additional help in raising daughters.

I finished this book earlier this year and it ruined me in a good way. I highly recommend it to anyone with daughters. I also found the scientific evidence behind abstinence until marriage fascinating.

Blake, bring this book to NYC if you remember. I would like to look through it. I have always believed that a girl’s confidence reflects the type of relationship she has with her father. Sounds like a good book.