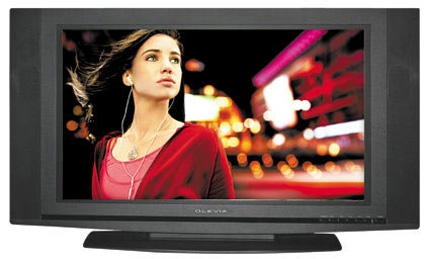 Steven Smith, my whiz-kid of a brother-in-law, believes Circuit City, Best Buy, and other electronics retailers may be purposefully degrading the signal of low-end HDTVs in an effort to maximize the sale of more expensive HDTVs. Although unconfirmed, he may be right.

In July, I spent several hours researching a quality HDTV that was within my budget. Given its favorable reviews and a recommendation from a friend, I decided on the Olevia 32″ 232v, a lower-end model.

Upon arriving at Circuit City to make my purchase, I noticed the picture quality of the 232V looked anything but favorable — It looked horrible. I quickly began to doubt the numerous consumer reviews I had read. Amid my obvious concern, the sales clerk told me I’d be better off spending a few hundred dollars more for a “nicer” TV.

It was pretty intimidating to be at the store, ready to spend a sizable amount of money, only to find an undesirable surprise (however, legitimate). In the end, I went with my gut feeling and bought the Olevia. I’m glad I did — the picture in my living room looks beautiful, and is a far cry from what was being advertised in the store.

By contrast, a visit to Costco (or any store with less incentive to sell a specific product) shows that nearly every HDTV on display, regardless of its price, looks gorgeous. It seems as though the quality gap between low-end HDTVs and high-end ones isn’t as noticeable as the disparity between SD sets — that could be a bad thing for persons selling TVs.

Oh — and for the record, the phrase “I’m not on commission,” is misleading. Dudes and dudettes get paid hourly for sure, but earn attractive bonus incentives when upselling additional products and worthless extended warranties. Just so you know.

This is a good story worthy of some investigation.

I have always been a little taken back at how bad some of the HDTVs look in the stores.