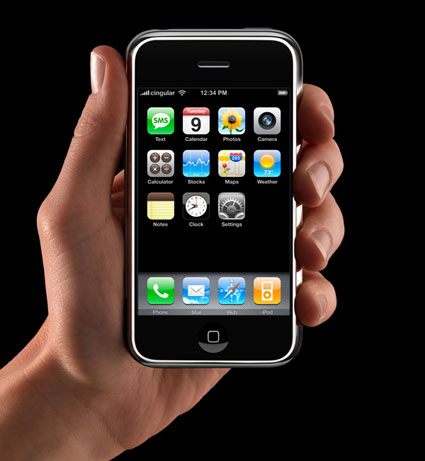 In a word, slick. And clearly one the more ambitious phones we’ve seen to date, with seemingly a lot of potential from the videos I’ve seen. It’s not without its problems, however. A single carrier is lame, 4Gb and 8Gb is a bit limiting though manageable, and I’m not sold on a touch screen keyboard. If anyone can make it work, it’s Apple, but I’m a big fan of physical clicks and actual buttons (tips hat to Blackberry). After all, it’s the only thing I know. So what do you think of the new, still not approved by the FCC, iPhone?

i will have to wait to see it in person in order to make my final decision, but as for now i’m a fan. looks really promising for a version 1.0.

by the way, is that the same hand as your jan 5th post?

I’m already planning to get one, and I’m not THAT much of a gadget whore. My only reservation is $499 AND a two year contract… That seems excessive.

Sure it looks good – but I have a real problem with the 4gigs/8gigs. For those of us who are used to our iPod having ALL of our songs and videos, this phone wouldn’t be able to do the trick. Not even one season of the Office will fit on that! I’m sure they will come out with version after version until it fits…

I’m at Mac World right now and I just got done getting up close and personal with the iPhone. Its cool but I think the touch screen and Cingular will both be problems for the device. I don’t see Blackberry fans abandoning their devices for the iPhone.

Chad is right on about they’ll keep coming up with version after version that offers more storage. Why don’t they have an expandable card slot on it? I heard that there is a 64 gig SD card coming out this year – I guess that if you could add 64 gig to your iPhone with just ONE card you wouldn’t be inclined to buy the smaller more storage one from next year!

I totally agree with you Blake that actually clicking a button while emailing is an experience I’m not sure I want to give up. There is some sort of comfort in knowing that the button clicked and what you typed was entered.

While it’s sexy and all – it’s also running on a closed OSX system. I have 3 macs that are less than a year old. I have MORE problems with those machines than all of my PCs combined. If my cell phone is prone to acting like the Macs I already have, there’s no way I’m going to get one.

Finally, the battery life is a big issue, but the bigger issue in my mind is that you can’t swap out the battery! I always buy two batteries for my phones and keep one charging while i’m burning the other one. With only a 2 hour battery life and not being able to swap it out, there’s no way I could make my most important portable device be the iPhone.