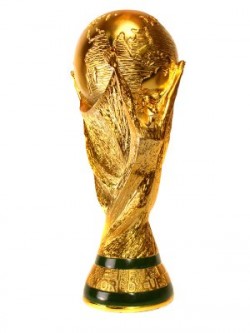 Soccer doesn’t make much sense to Americans. Admittedly, it defies many principles we value most in domestic sports, including conclusive endings, lots of scoring, and sportsmanship (aka the opposite of this). Nevertheless, every four years, the World Cup turns numerous Americans into fans of the sport, including Los Angeles native Eric Altshule, who writes:

When I was 11, I thought soccer was gay. How could it not be? Sports was an activity broadcast on network television with production values and drunken announcers like Howard Cosell. Soccer was (at least in Los Angeles) a grainy, week-old, video of a Bundesliga game broadcast on PBS (which in itself is gay) narrated by some guy with a British accent. I played Little League and basketball, and one year my mom signed me up for soccer because she thought it was European, and thus cultural (i.e. gay). Our team name was The Leprechauns (how gay is that?) because some kid’s Irish dad was the coach. No thanks to my skills, we ended up winning our league, and I hid that trophy way back in the closet where nobody would ever see it and told my mom that I never wanted to play that dumb sport again.

Altshule goes on to explain how that all changed after attending a World Cup game on a whim in 1994, the year the U.S. hosted the event:

That game was like nothing I have ever seen. The Olympics were filled with singing and dancing and that stupid flag and lots of polite cheering. In fact, if I was 11 at the time, I would have called the Olympics gay. This, on the other hand, was about naked nationalism, unbridled passion, and an unalloyed desire to see your team triumph. When the Italians scored just after halftime, their fans were in ecstasy. Kirk Gibson home run ecstasy. The Mexican fans emotionally crumbled. When Mexico scored 10 minutes later, the emotions reversed. The game ended in a 1-1 draw, and even though cynical American sports fans were supposed to feel unsatisfied at a draw, I was enraptured. Totally hooked. And, eventually, obsessed.

I first became fascinated with soccer after watching this scene from a 1981 b-grade movie staring Silvester Stalone. Yes, the film was scripted and choreographed. But similar flashes of brilliance happen in real soccer. And they happen all the time at the World Cup. Which is why I watch it religiously every four years.

But do you watch soccer out side of those four years also? Me I have only watched one world cup game ever and that was a US v. Germany game in the 2002 World Cup, and then only the bit I saw on my lunch break at the dairy plant in Germany. It was so cool to be the only one cheering when the US scored on D-land. Come to think of it, that was a really cool experience, maybe I need to open myself up more to the game I never could manage to play.