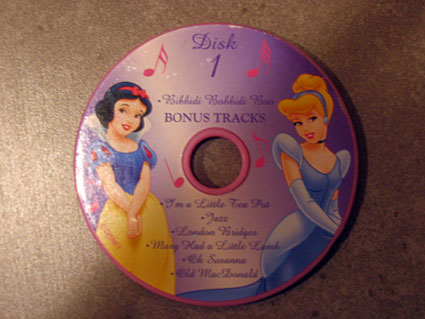 The toy compact disc you see pictured above is not compatible with PS3 hardware — in fact, the little booger is twice as thick as standard CDs.

But the irregular gauge nor warranty endangerment would keep my little Sadie from trying to play “I’m a Little Tea Pot” on the ill suited $500 machine this past Monday. Amazingly, the PS3 took the disc, but wouldn’t give it back — the Blu-ray drive was in duress.

Enter Steven Smith, my 19-year old brother in-law and his willingness to disassemble all things electrical and/or mechanical. Within minutes, Steve had the PS3 undressed with its innards laying on my ridiculously small dining room table. 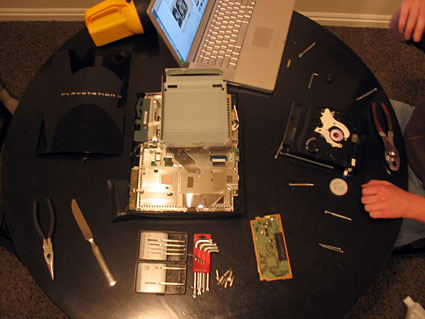 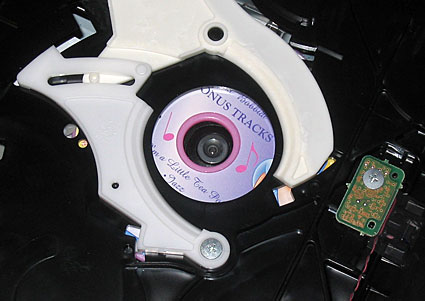 Steve then seized the pink nightmare, realigned the gears, and re-engage the drive only to accidentally snap a wire upon reassembly. Long story shot: a local electronics store resaudered the wire for $25 the following day, and all is well in the overly expensive (though still appreciated) PS3 game demo/HD movie land.

Sadly, I missed the opportunity to thwart any future attacks on my PS3 as the infraction wasn’t caught until several hours later. By then it was too late for me to reprimand (read: spank) Sadie.

Just know that PS3 security is at an all time high in the Snow house right now.

Ha! What an engaging read, Blake! I loved it! And don’t be too frustrated with Sadie; from the story, she sounds like quite a smart cookie.

That’s probably the most action your PS3 has seen.

the butter knife is a valuable tool indeed..

couldnt have done it without it!